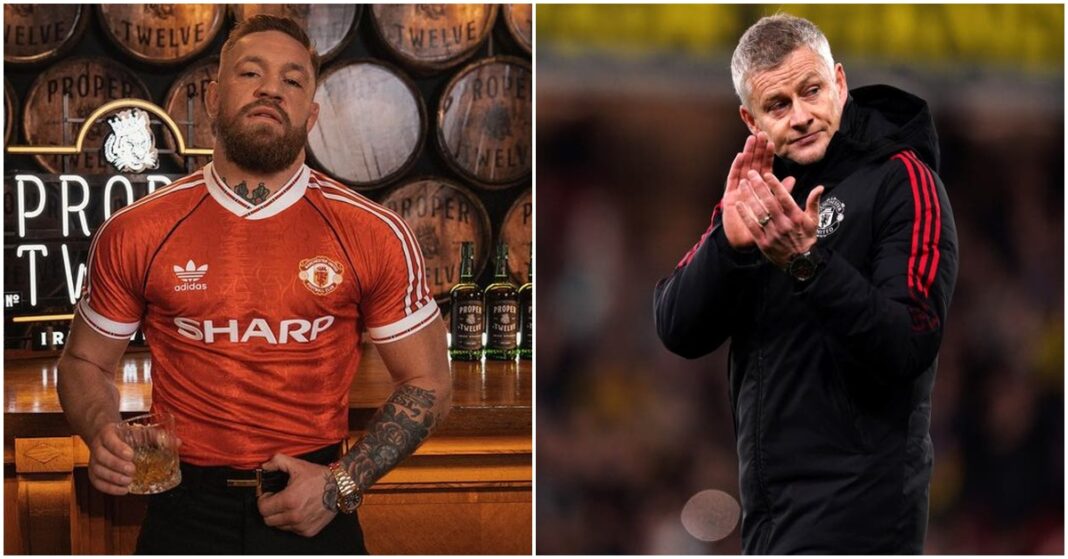 Conor McGregor is one of many Manchester United fans with mixed feelings today after the club sacked its manager Ole Gunnar Solskjær.

The Norwegian has been hanging by a thread ever since ‘The Red Devils’ suffered a 5-0 drubbing against their biggest rivals, Liverpool, in October.

‘Notorious’ called for Solskjær to be replaced as manager back then and suggested the club legend be given a new role at Manchester United.

“The issue with [Manchester] United is it’s just (a) bunch of young fellas talking to each other,” McGregor wrote in a since deleted tweet. “Peers. You need some one above the group char to take the helm. Ole [Gunnar Solskjaer] was on the bench when [Cristiano] Ronaldo played. A peer. Not enough. Love and respect, Ole to the max but his role needs rearranged. My opinion.“

Solskjær’s fate was sealed on Saturday when his side suffered another heavy defeat, this time losing 4-1 to recently promoted Watford. On Sunday, the club legend was officially relieved of his duties.

McGregor took to social media to react to the news and express his gratitude to Solskjær for his efforts at the club as a player and as a manager.

“I want to give a major shout out, and a huge thank you to the living legend that is Ole Gunnar Solskjær! Ole you are forever, Sir! Icon! Inspiration! Hero! Legend! Thank you Ole @ManUtd”

The former dual-weight UFC champion is on record saying he wants to buy his boyhood club. McGregor has also expressed an interest in securing a stake in Scottish Premier League side Celtic.

“A conversation came up regarding Celtic first to be honest,” McGregor wrote. “To acquire shares from Dermot Desmond (an Irish businessman who is the largest shareholder with the team). I am certainly interested in acquiring a sports team at some stage!” he wrote.

“Both Celtic and Man United are teams I like for sure. But I am open. I feel I could do big things for a club.”

Do you think we’ll ever see Conor McGregor running a football club?