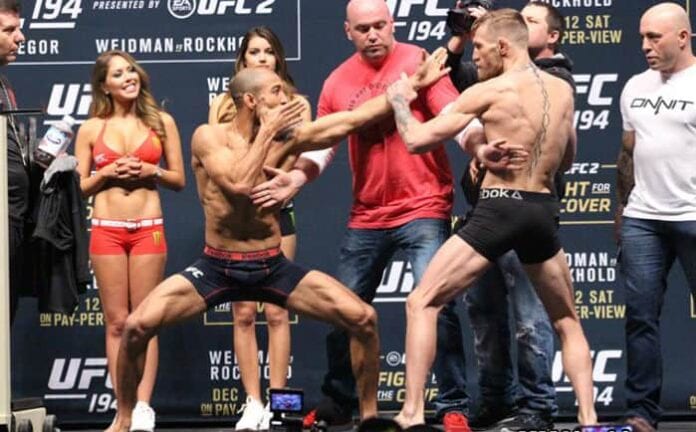 Conor McGregor makes an interesting accusation against a fighter that he knows quite well, Jose Aldo.

Their first fight went down at the UFC 194 pay-per-view event on December 12, 2015, at the MGM Grand Garden Arena in Las Vegas, Nevada. In that fight, McGregor moved backward and connected with a left hook that landed on Aldo’s chin.

As a result, McGregor won the fight by KO and was crowned the UFC featherweight champion in just 13 seconds.

Aldo is slated to meet Alex Volkanovski in a featherweight bout at the upcoming UFC 237 pay-per-view event. The UFC’s official Instagram account recently posted a photo of the former UFC featherweight champ.

This resulted in the following comment from McGregor where he wrote, “Back on the sauce.”

It should be noted that this comment has since been deleted. However, once something is posted on the internet, it’s there for good. You can see it thanks to this screenshot.