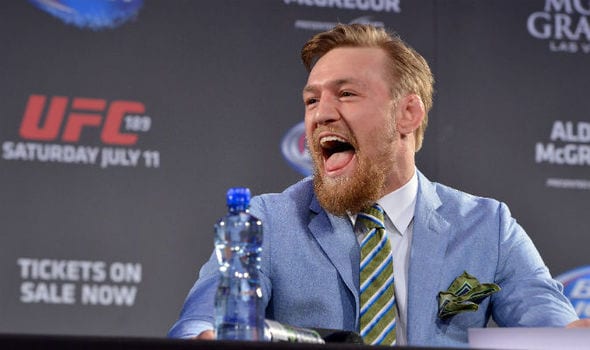 Conor McGregor has fired shots at his bitter rival Khabib Nurmagomedov who is due to fight the interim lightweight champion Justin Gaethje at UFC 254 on October 24.

Joe Rogan accidentally started something when he posted a video to social media which showed Gaethje hitting pads with his coach Trevor Whitman in the JRE studio.

“Awesome morning at the studio where I had the privilege of seeing the savage @justin_gaethje and the master Trevor Whitman of @onxlabs put in work! Thank you also to my brother @yacoubianmuaythai for the awesome training session!”

Nurmagomedov immediately took to the comments section to explain his UFC 254 opponent will need more than boxing to be successful against him, he wrote.

“Justin is a very nice guy and opponent for me, but when Octagon close he have to be ready not only boxing match, I’m not Dustin or Tony. I will take him into the deepest ocean and drown him,” wrote Nurmagomedov.”

McGregor took this opportunity to mock his former foe by offering up his own translation of Khabib’s game plan, he wrote.

“In other words – ‘I’m going to be running around the outside of the cage, sh*tting my pants. And within the first ten seconds of the fight I’m diving at his legs for a good whiff of his jockstrap’”.

Do you agree with Conor McGregor? Will Khabib Nurmagomedov be desperately trying for the takedown at UFC 254?