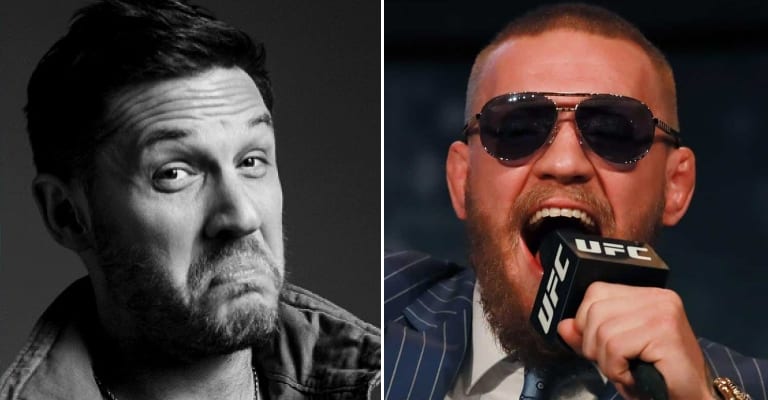 Add movie inspiration to the long list of Conor McGregor’s many hats. Megastar actor Tom Hardy recently revealed that ‘The Notorious’ served as an inspiration for his character in the upcoming comic movie ‘Venom.’

Hardy told RTÉ Entertainment that McGregor served as his inspiration mainly because he “wants to have a scrap with everybody.” That could be true from a certain perspective. Speaking with RTÉ in an interview with at the recent ‘Venom’ press day, Hardy as went as far as to describe McGregor as a “key note” inspiration for his Eddie Brock role.

“Venom” often battled with archnemesis Spider-man in the comics. Spider-man will not appear in Hardy’s new film, however, due to licensing issues. In the film, Hardy plays disgraced reporter Brock, who comes into contact with an alien symbiote. Brock bonds with the symbiote to become ‘Venom,’ a superpowered anti-hero.

The topic of McGregor either being offended or flattered by the comparison came up. McGregor obviously had his own problem with outside-the-cage violence earlier this year. He just recently got past it by accepting a plea deal.

As one of the richest fighters of all-time, not much bothers McGregor. Hardy believed he wouldn’t be as a result. He then clarified that it wasn’t Venom whom McGregor inspired but more Brock himself:

“I don’t think he’d be bothered, really,” Hardy replied. “Conor doesn’t strike me as the type of person who might be that bothered!

“There was an aspect the studio wanted somebody who could fight, which they always do in these sort of hero movies. They want somebody who can have a scrap. Conor obviously wants to have a scrap with everybody, so that’s useful.”

The Irish UFC star wasn’t the only inspiration for the role, however. McGregor was more of an “interior” inspiration that an outward portrayal, he said. Hardy also said you might notice a bit of Harrison Ford as Indiana Jones in there too:

“Then there were bits of Harrison Ford as well from Indiana Jones and other elements within.

“He [McGregor] was definitely a key note but I don’t know if you’d recognise him in the portrayal. It was more of an interior choice, if that makes sense.”