LowKickMMA.com
Home UFC News Conor McGregor denies rumors about steroid use, claims his physique is due... 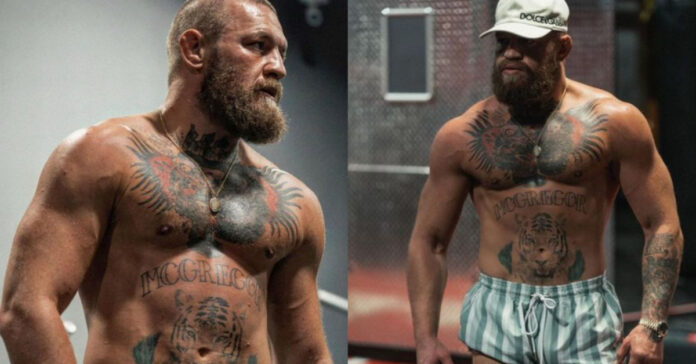 Conor McGregor has hit back at fans after being accused of ‘using’ performance-enhancing supplements,’ following a recent viral video he posted to his social media.

McGregor, who is very active online, uploaded the clip on Friday of him flexing his physique during a gym session, as he looks to get into peak condition for his co-acting role in ‘Road House’ alongside Jake Gyllenhaal.

In the video, we can see Conor McGregor the biggest we may have ever seen him, as he flexes his biceps whilst screaming down the camera lens.

However, the viral footage has prompted many questions and discussions about McGregor potentially using steroids

The ‘Notorious’ who is looking to make a comeback to the UFC and fighting, has been seen training hard ever since his horrific broken leg injury in his last fight against Dustin Poirier in July 2021 at UFC 264.

Although many fans and critics are shocked at the current size of McGregor, and how he has been able to put that much muscle in such a short time.

READ MORE:  Michael Chiesa predicts the return of a former UFC champion: "Rockhold is coming back."

In response to one of many claims, Conor McGregor has debunked the rumor, revealing to fans what his secret recipe is.

“Proper Twelve and Forged Irish Stout. Served alongside my own, organically grown, Irish beef, served on a hot stone. Tidl spray for pain.”

Although the former UFC Champion has been pursuing a handful of other business ventures, McGregor’s main focus is to make the best sporting comeback the world has ever seen.

He and his management are confident he will make his return to the Octagon in 2023, while the right returning matchup has yet to be picked out, especially as Nate Diaz is now a free agent following his win against Tony Ferguson at UFC 279.

Do you think Conor McGregor is taking sporting enhancement supplements?