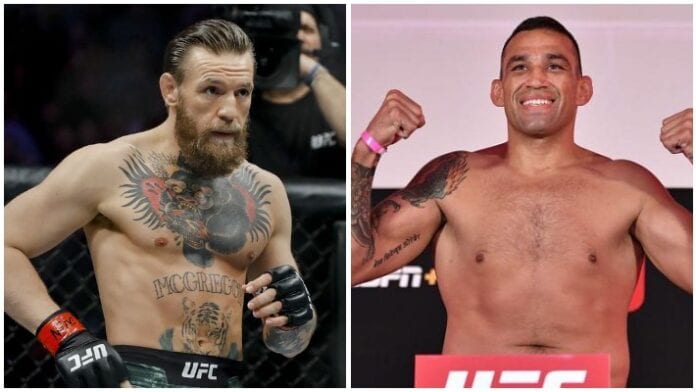 McGregor posted out yesterday urging the promotion to adopt proper drug testing procedures like the UFC. The Irishman who is often divisive seemed to be making a pretty fair point that the vast majority of people could get behind.

However, he found an unlikely foe in Werdum who seemed to think ‘Notorious’ was taking shots at Bellator featherweight champion ‘Cyborg’.

McGregor responded but seem perplexed by Werdum who brought up the WMMA great out of nowhere – he tried to get back to the point at hand.

“Huh? I did not mention Cris whatsoever. Nothing to do with Cris at all. It is a request to the promotion, as a top tier one, to up its PED testing program. As currently there is zero in place. This is a dangerous business and to take a lax stance here, at this level, is wrong.”

The 32-year-old then seemed to click as to why the Werdum had such strong feelings about Bellator’s inept drug testing procedures.

“Actually wait! Aren’t you currently banned for steroids right now? And got your sentenced reduced for ratting other people? And also just recently signed to this promotion I speak of? Woah. Man, fuck you. My lord, what a business this is,” McGregor wrote on social media.

Werdum continued under the impression that McGregor was tweeting in defence of Sinead Kavanagh who was “beat up” by ‘Cyborg’, despite the fact the two female fighters have never squared off inside the cage.

“The funny thing is it was cause a girl 145 that trains at your gym Sinaed Kavanagh posted a tweet about testing following Cyborg Beating her up Why are you backtrack now,” Werdum replied.

McGregor was perplexed by Werdum’s continued suggestion that Kavanagh and ‘Cyborg’ had fought and tried to get back to the point at hand once again, he wrote.

“They never fought, McGregor said. “I train Sinead. I manage Cris. Both tremendously gifted warriors. This is not about either! Or any of the roster for that matter. It is about the promotion itself stepping up to the plate, as one of the top tier organisations in MMA, and upping its testing.”

Werdum ended the conversation by saying someone with McGregor’s track record should not concern himself with Bellator drug testing, he wrote.

The Brazilian submission specialist continued to tweet at McGregor without response throughout the night. Head over to his Twitter page to see what else Werdum had to say about ‘Mystic Mac’.

Do you agree with Conor McGregor? Should Bellator begin drug testing their fighters?