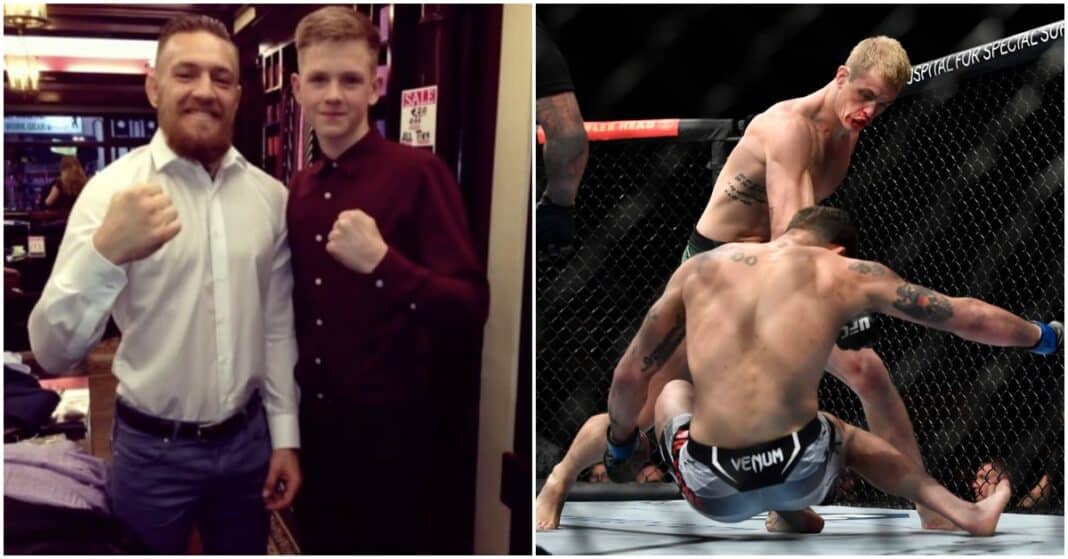 Conor McGregor was impressed by the UFC debut of his fellow Irishman.

Ian Garry met Jordan Williams on the prelims of UFC 268. The former Cage Warriors champion got off to a somewhat slow start, eating a number of shots from Williams early on. However, in the dying seconds of the first round, Garry was able to find his timing, avoid a punch, and fire back one of his own. The shot landed cleanly on Williams chin, and a few punches that landed afterwards appeared to be academic.

McGregor was quick to jump on Twitter and congratulate his countryman on a successful UFC debut.

McGregor immediately took to social media afterwards to congratulate Garry on his performance. Garry trains alongside ‘The Notorious’ at SBG Ireland. He hasn’t been shy about saying that he looks up to McGregor and models his game after him. Needless to say, McGregor was proud of his pupil.

“You little f—in daisy Ian!” McGregor wrote. “The step back, back paw an all ahahahaha just absolutely incredible!”

‘Notorious’ later added three voice notes to his Twitter timeline and it’s clear he was hyped up following Garry’s performance.

Garry was somewhat critical of his own performance afterwards, saying that it was the first time he had ever felt nerves inside the cage. Still, he managed to come up big when it mattered the most, and it’s a performance that is sure to put him on fight fans radar.

The 23-year-old came into the organization with a lot of hype behind him, and he has managed to live up the billing so far. It will be interesting to see how he performs as he moves up the UFC ladder.

What did you think of Ian Garry’s performance? Were you as impressed as Conor McGregor?