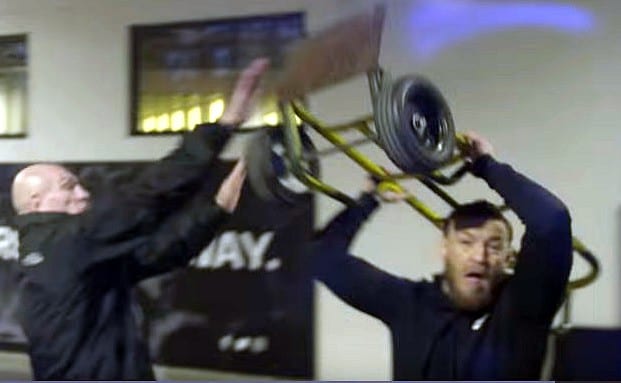 McGregor sounded off on the frightening scene that ultimately forced three fights off of April’s UFC 223. While the Irish megastar was jailed on assault charges, he says it was Nurmagomedov’s fault.

Sounding off at today’s UFC 229 Press Conference from New York City, McGregor said he spoke the truth when all he did was present himself for a fair fight at the Barclays Center last April.

When Khabib didn’t come out of the bus before UFC 223, he caused McGregor’s assault where he threw a metal dolly through a bus to happen:

“The truth. Because that’s all I talk. That all I talk, truth. Smash me, mate. Smash me! You say, “send location,” here he is right in front of ya. I’m right in front of ya! Did you not see me outside the bus, no? Did you not see outside in front of the f*****’ bus? I showed you may hands, no weapons. The first thing I showed up at this bus, I showed him my hands to let him know I come here unarmed, no weapons. No weapons, step off the bus. You talked a big game, now I’m here.

Nurmagomedov often wondered why McGregor would not have simply gave him his location to fight him fair and square. To that, McGregor said he knew his location now and still did nothing:

“Here’s my location you little fool. Right in front of you. Do somethin’ about it! Yeah, you’ll do nothin’!

Saddle up, fight fans. It’s about to be a wild ride.