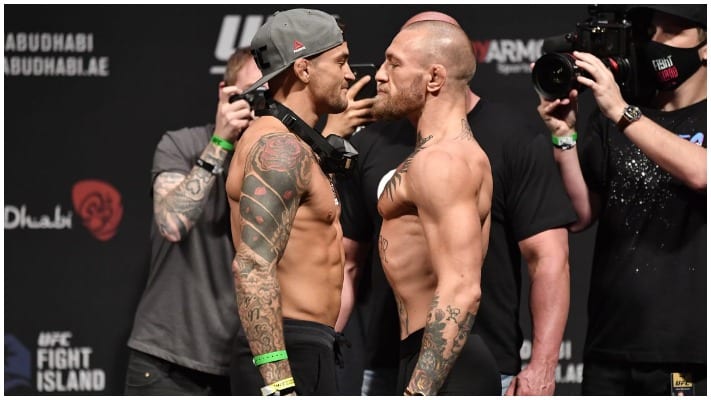 Conor McGregor says he will no longer be fighting Dustin Poirier on July 10 and will instead face a different opponent.

The former dual weight UFC champion is booked to square off against Poirier for the third time this summer.

McGregor knocked out ‘The Diamond’ when they first met at UFC 178.

Poirier got his revenge earlier this year when he stopped McGregor inside two rounds at UFC 257.

In the build-up to UFC 257, McGregor and Poirier kept things friendly.

Post-fight, things seemed to remain friendly. Poirier’s wife even went into the locker room of McGregor to thank him for his generous donation that would help build a gym in Poirier’s hometown.

MMA fans assumed McGregor had made his payment and Poirier had quietly started work on the Louisiana gym.

However, last night, ‘The Diamond’ revealed McGregor’s team had ghosted him.

The Irishman claimed he wouldn’t hand over a donation until Poirier had provided his plans for how the money would be spent.

READ MORE:  Anthony Smith Responds To Conor McGregor Trolling: 'He'll Never Be One Of Us Again'

McGregor has reacted badly to Poirier publicly outing his failure to deliver the $500,000 he pledged to The Good Fight Foundation. He’s recently taken to social media to blast Poirier and call off their upcoming fight.

“You’re ripped you inbred hillbilly,” McGregor wrote on Twitter. “Why do you wink with your ears? You fucking brain dead hillbilly. 500k with no plan in place. Ye hang tight. Fool. You must be new to money. The fight is off btw. I’m going to fight someone else on the 10th. Good luck on your old contract kid.”

Do you think Conor McGregor will refuse to fight Dustin Poirier on July 10?