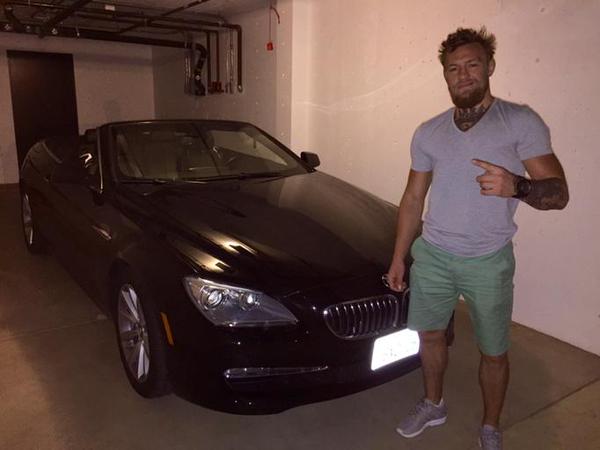 Irish featherweight sensation Conor McGregor made a serious statement in the last week, claiming he’ll be getting a record setting nine figure UFC contract in the coming months. Meaning he’d be locked in for a $100 Million deal to the world’s biggest MMA promotion, the interim champion is backing up all his claims over the last two years, should he eventually seal up the negotiations on the landmark deal.

Already a ‘multi-millionaire’ according to himself, McGregor’s father Tony says that his son has bought the whole family brand new cars and then some. Check out what he told The Irish Times:

“It just blew us away. When he came home from LA he called us all up to his new abode… and he sat us all down and he just spelled it all out with his accounting firm.”

McGregor told his family he’d be paying off the mortgage on their home, and then gave them some brand new BMW’s, one each in fact:

“It was a huge gesture, we’re really very lucky about this,” said Tony.

“He spelled it out, what he was going to do for us. We walked out of there and we all had BMWs. I’m driving a 5 Series BMW now, brand spanking new. His mother is also driving one and his sister is driving one.”

Conor’s father Tony, a taxi driver for the past 25 years in Ireland, says that he’s been to some less than savoury locations to watch his son compete in MMA over the years, making this rewarding gesture all the more meaningful:

Tony explained how the family has travelled with McGregor to “some very salubrious” locations, such as Sweden and Las Vegas, to watch him fight. “But we’ve also been in the less salubrious locations prior to him signing for the UFC. We did the GAA halls, we did the small venues around the town before he was signed. We’ve been there from the start.”

“He has an A-list lifestyle now. He’s more used to the Jacuzzis and the swimming pools. Also he’s on the cusp of signing a major deal with the UFC now at the moment, the biggest deal in UFC history so he knows exactly where he’s going in the business stakes.”

“He doesn’t fear any of his opponents,” he said. “He has this fight won since January.”

So Conor McGregor’s wealth and influence in the sport of MMA continues to grow, but so much hangs in the balance of his unification bout with Jose Aldo at UFC 194. A loss could prove shattering for both the promotion’s interests and also McGregor’s future plans.

That said, he’s predicted everything else correctly thus far, so what’s to say he isn’t right about his next fight too? Granted he doesn’t fear anybody, but neither does ‘Scarface’ and he’ll also be hunting for blood come the long awaited fight night.