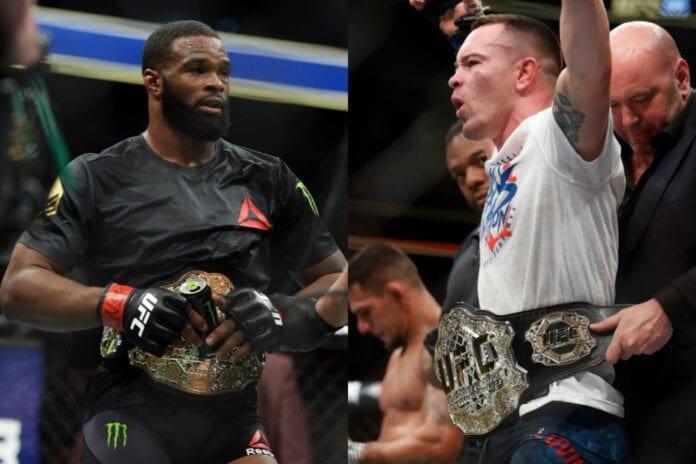 Top Welterweight contenders Colby Covington and Tyron Woodley have been on a collision course for years now. This bad blood matchup seems to have some steam in the next coming months for what should be a huge bout.

Covington was offered the former champion Woodley in the headliner of the UFC’s Aug. 22 event, Woodley says he won’t be ready until September or October.

Covington went on MMA Junkie and spoke about his fellow welterweight contenders, “Why is he not ready to go in August?” Covington asked MMA Junkie. “He just told his manager, that cokehead Malki Kawa at First Round Management, that he wanted to fight Colby last week. We were supposed to fight. He gave his verbal confirmation to the UFC. I gave my verbal confirmation. I signed the contract. Why is he not showing up now? He’s been talking all that sh-t saying I ducked him, this, that. He’s the only one that’s ever ducked me. I’ve never ducked him.”

Covington went on to explain that he wouldn’t let this fight fall apart, mainly due to the face that he wants to be one to retire Woodley.

“All that sh-t that Tyron’s talked, he’s not getting off easy,” Covington said. “He’s going to have to come and hold himself accountable for all the things he said, so whenever Tyron’s ready. I’ll be ready in August, but if he has to push it back to September, then we can do it in September, but he’s not getting out the easy way. I know he wants to show up and be the big brother and save his little brother ‘Street Judas’ Masvidal because ‘Street Judas’ Masvidal is already ducking and diving and looking for any way around not to fight me.”

Covington agreed that this fight makes sense in terms of a top contenders bout in the highly competitive welterweight division.

Certainly a huge fight with tons of implications on the outcome. It would be quite the headliner.

How Do you See a Colby Covington vs Tyron Woodley fight playing out?