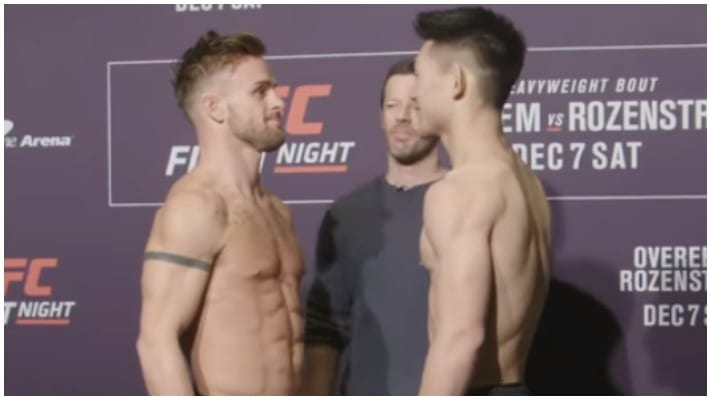 Next up on the UFC DC main card is another bantamweight bout between Cody Stamann and Song Yadong.

Round 1: A lot of feeling each other out to begin this bout. Yadong is pushing forward with blitzes. He misses with a close spinning wheel kick that gets the crowd’s attention. Stamann times a takedown to perfection but Yadong grabs Stamann’s neck while getting up and seems to be attempting a guillotine. However, he lands an illegal knee on Stamann’s head as the bout is stopped. Yadong is deducted a point. Yadong is more aggressive now. After a lot of distance control, Stamann ends the round with a takedown.

Round 3: Stamann takes Yadong down. Yadong looks for his knee for a submission but fails as Stamann moves to half guard. Yadong tries to scramble but Stamann grabs his back and returns to half guard. Stamann is controlling him more now as he lands some strikes from the top. Yadong looks fatigued as Stamann moves to full mount. Yadong gives up his back as Stamann gets hooks in. Yadong scrambles but Stamann gets full mount again and lands big strikes to end the fight.