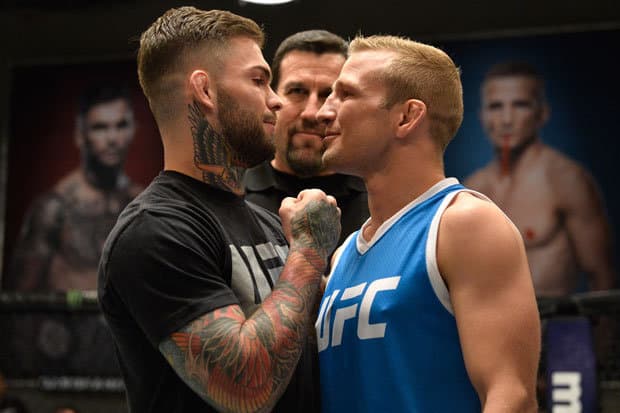 Former Team Alpha Male teammates-turned-rivals Cody Garbrandt and TJ Dillashaw simply don’t like each other. The two have engaged in trash talk ever since the lead up to their first fight at UFC 217.

Now, the two are slated to fight again at UFC 227, and the bickering has already started.

Garbrandt (11-1) said the current bantamweight champion is spoiled and hasn’t overcome real adversity during Monday’s edition of The MMA Hour (via MMA Mania):

“T.J. wants to go in there and talk all kinds of shit saying that I don’t deserve this and that, and he worked two years to get it back. He feels like he’s entitled because he’s been living with a silver spoon, getting spoon fed with that thing.”

“He’s never had to overcome any adversity. Hats off to him for being able to come back and get me in the fight, but (we’ll see) come August 4. He can talk all the shit he wants, I’m focused on my book doing well, hopefully it inspires and motivates people around the world.”

Since losing the belt to Dillashaw at UFC 217, “No Love” has become a father and written a book “The Pact,” and has relentlessly skewered Dillashaw (15-3) at every opportunity possible.

Garbrandt appears to be brimming with confidence leading into their highly anticipated rematch, yet still managed to slight Dillashaw in the process:

“He’s kind of a mental midget, he’s got to have those coaches around him, people like that are ‘yes men’ to fill his head. I’m excited for this fight.

“It’s (like he thinks it’s) going to be the Barao fight. I will tell you now, I am no Barao and he knows that. He knows I can keep it up from the first round to the fifth round, the way I whooped his ass like that. He is going to be in for a long night.”

Does Garbrandt have a point about TJ Dillashaw? Or is he just talking trash to a heated rival?