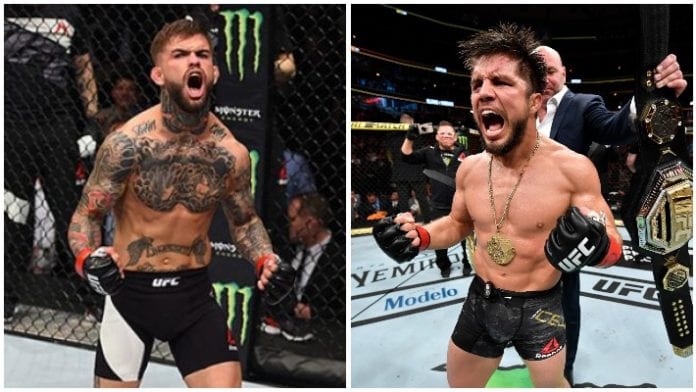 Former bantamweight champion Cody Garbrandt has announced his intention to drop down in weight after his next fight.

Before the move, Garbrandt is supposed to face long-time contender Raphael Assunção. The bout was originally scheduled to co-main event the now postponed UFC Columbus card but the former 135lb champion was forced out of the fight due to injury.

Current 135lb champion and former flyweight king Henry Cejudo was quick to respond to Garbrandt, he said via Twitter.

“I own that weight class too! No where to hide @Cody_Nolove #bendtheknee”

The pair went on to share a few messages and create a new rivalry out of thin air – check out the Twitter exchange below.

Garbrandt: We will see you. If you are calling the shots and picking your fights. Then I’ll see you soon. We all know when you’re the champ you call the shots. No easy way out for you at any weight class.

Cejudo: Did Ali write that for you?

Garbrandt : We all know @AliAbdelaziz00 bends you over both of his knees

Cejudo: Cody Garbage you are funny!

Garbrandt captured the 135lb title beating all-time great bantamweight Dominick Cruz in an emphatic fashion almost four years ago. Since then Garbrandt is on a three-fight losing streak after suffering consecutive knockout losses to TJ Dillashaw (twice) and Pedro Muhnoz.

In contrast Cejudo has been in fine form. The Olympic gold medallist has hit his MMA peak and captured titles in two weight divisions. He holds high profile wins over Demtrious Johnson, TJ Dillashaw and Marlon Moraes.

Would you like to see Henry Cejudo and Cody Garbrandt fight?