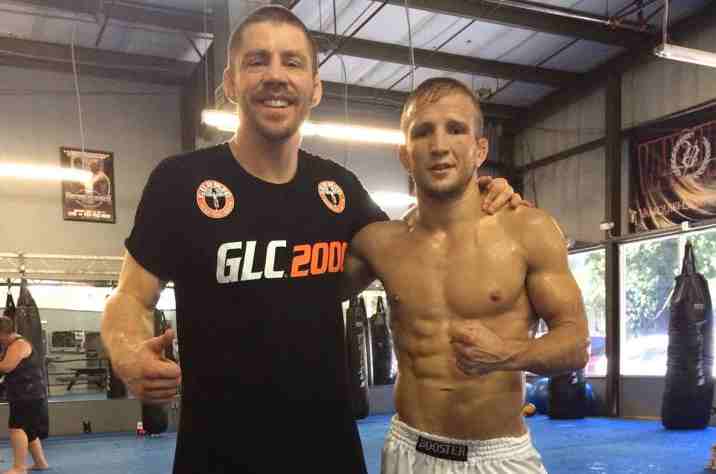 T.J. Dillashaw (13-2) is set to fight Dominick Cruz (20-1) at UFC Fight Night 81 in a bantamweight title bout, and there’s been a lot of talking leading up to this fight. Duane Ludwig recently spoke with UFC commentators Jon Anik and Kenny Florian on their podcast to promote the fight, and he did just that.

According to Ludwig, he believes that Cruz is not a threat to Dillashaw or his title. He’s so confident that he is predicting a second round finish. Keep in mind that Cruz has never been knocked out and only suffered one loss in his career, which was to Urijah Faber and that was by submission.

“He just moves and doesn’t get hit, which is nice,” Ludwig said of Cruz. “He gets guys out of position so they can’t really follow up. But that’s just because people aren’t bringing their feet with them while they strike, something T.J. is very good at. So I don’t see [Cruz] as too much of a threat. We do have to respect him, but I feel T.J. is going to finish him in the second round.”

Ludwig thinks that former bantamweight champion Renan Barao is more of threat to Dillashaw than Cruz. Ludwig made it clear that he has a lot of respect for Cruz because he never lost the title, but rather was stripped of the title due to injuries.

“Obviously, fighting for the title and defending the title are always the biggest fights one can have in their career,” said Ludwig. “I don’t feel [Cruz] is as much of a threat as Renan Barao was. It’s still a huge fight, obviously. I have a ton of respect for Cruz. He never lost the belt. He’s back to the top now after some injuries. I respect his commitment to the sport in his career.”