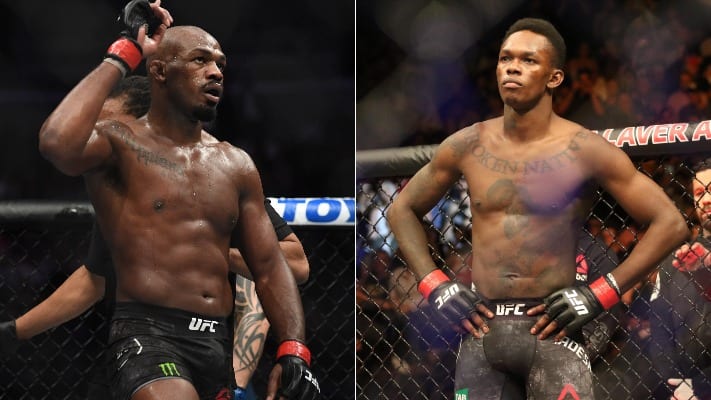 If Jon Jones vs. Israel Adesanya does eventually happen, it will be at heavyweight according to the former’s coach Mike Winkeljohn.

The pair have been going back-and-forth for much of the year and it appeared there was a missed opportunity for the highly-anticipated super fight to take place with Adesanya now expected to move up to face Jan Blachowicz for the light heavyweight title.

That title, of course, was vacated by Jones recently as he now plans a move up to the heavyweight division. Adesanya has notably stated that he didn’t mind facing Jones at heavyweight if the latter went on to win the title there, but that his preference was for it to be at 205.

As far as Winkejohn is concerned, however, if Adesanya wants the fight, he should move up to heavyweight.

“My first thought is heavyweight,” Winkeljohn told Submission Radio. “Have Israel come up to heavyweight. Here’s the deal, Jon Jones has always fought a who’s who, and it’s always been this guy, you have to go beat this guy to secure your legacy.

Even if Jones was willing to move down to light heavyweight again, Winkeljohn sees no point in him putting on the muscle mass only to move back down.

“Probably heavyweight. Jon’s current mindset is to get to heavyweight,” he added when asked which division he thought the fight would take place in. “That makes sense. Once he puts all that mass on, there’s no reason to come back down. What’s the purpose of that? Go back down to chase Izzy? Absolutely not.

“Jon’s the man, that’s why he’s the greatest, and people need to chase him, and he’s a leader, he’s the leader of the sport.”

Despite the heated rivalry between Jones and Adesanya, Winkeljohn still rates “The Last Stylebender” very highly as a fighter.

“I’m always amazed at some things he does,” Winkeljohn said. “I think to myself, gosh, if he only does these things against him, and then Izzy makes a small correction and solves that problem. So, he’s a hard guy to figure out in that he has so many skills and such great timing, great speed and takedown defense.

“He’s so well-rounded and getting better. He’s getting better every fight. I’m watching it, I’m real impressed with what they’ve been able to do with the team down there in New Zealand.”

That said, he still expects his pupil to come out on top.

“Striking-wise, here’s the deal, Jon’s fought some big, tall, long guys before and he’s done well,” Winkeljohn explained. “The first fight with [Alexander] Gustafsson wasn’t Jon’s great night by any means. Not all of Jon Jones was there for many reasons in that fight. But he’s already fought a lot of long guys.

“I’m not sure if Izzy’s fought a Jon Jones before as far as length goes. And definitely nobody has fought Jon Jones as far as skillset goes. I know everyone that comes to my gym. They’re big heavyweights, they come in, and I think they’re immediately surprised by how big Jon’s presence is in the cage when they start working out with him.

“… If in Jon’s mind he says, I’m gonna beat him on the feet, that’s what he’s gonna do. But if Jon says, you know what, I’m gonna go home and just secure the win and show him what MMA is all about, welcome to my world, I’m sure he’ll take him down and bloody him up with elbows.”

Do you agree with Winkeljohn?