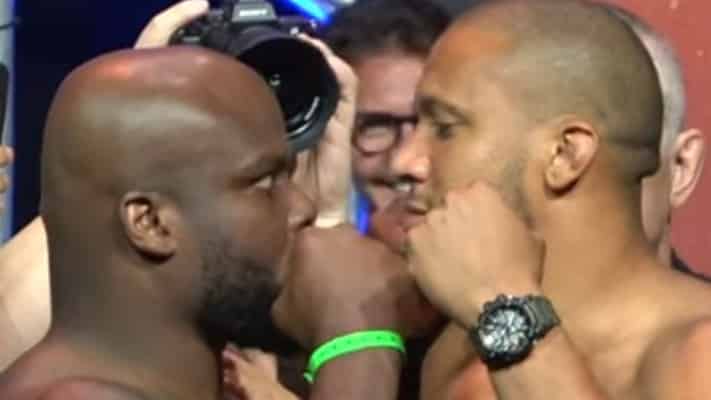 UFC 265 is finally upon us, featuring a main event with the interim heavyweight title on the line between top contenders Derrick Lewis and Ciryl Gane. Lewis is looking to make a statement in front of the hometown fans in Houston, while Gane is looking to assert himself as one of the best fighters in the world.

Let’s see who will win the UFC interim heavyweight title and earn a matchup with Francis Ngannou.

Lewis opens the action with a high right kick that is checked, and causes him to slip briefly. Gane throws a big kick to the body that sends Lewis back to the fence. Gane seems more than willing to take his time and let Lewis come forward. Gane lands a stiff left jab near the fence. Gane and Lewis regroup in the center of the octagon midway through the round. Lewis nearly winds up for a big right hand but holds back as Gane slides out of the way and resets. Gane controls his range with a series of hard low-calf kicks that Lewis checks. Lewis lands a hard right hand to the body with under two minutes left in the round. Lewis catches Gane with a groin strike, time is called for recovery. Gane takes a minute to catch his breath before the action resumes. Lewis lands a hard right hand that gets a big reaction from the Houston crowd. Lewis begins to let the hands go and charges at Gane with about a minute left in the round, Gane is able to run out of the way and avoid significant damage. Gane lands a hard right hand just behind Lewis’ left ear. Lewis disputes an eye poke but time is not stopped. The round ends with Lewis rubbing his eye that appeared to get partially poked off a jab.

Gane opens up the second round with a pair of lead leg kicks. Lewis counters with a leg kick as well in an attempt to change levels. Lewis attempts to get the clinch but Gane throws him off. Gane attempts a high knee that nearly connects, Lewis attempts to clinch the fence and Gane is able to control position. Gane hits some swinging knees to Lewis’ upper leg and forcing side control in the process. Lewis seems tentative to let his hands go as the fight moves back to the striking phase. With a minute left in the round, Gane is able to get the clinch again near the fence and land some hard body shots with a pair of knees. The closing seconds feature a pair of right-high kicks by Lewis that barely miss.

Gane continues to control the pace of the right as Round 3 opens up. He lands a pair of heavy leg kicks that Lewis fails to check. Lewis is still moving normally, but it’s clear the leg kicks are causing him not to press forward. Gane isn’t Lewis an opportunity to throw the right hand in the pocket. Gane’s footwork and movement continue to give Lewis issues. Lewis attempts to get the fight back to the clinch, Gane reverses position and again goes to some hard knees to the body. Lewis takes some deep breathes with two minutes left in the third round, Gane sees Lewis getting tired and lands a flurry of hands that nearly drop Lewis. The two are trading bombs right now in near the cage. Lewis is badly hurt and appears to have his legs compromised. Gane knocks Lewis down once again and lands some brutal ground-and-pound to end the fight.