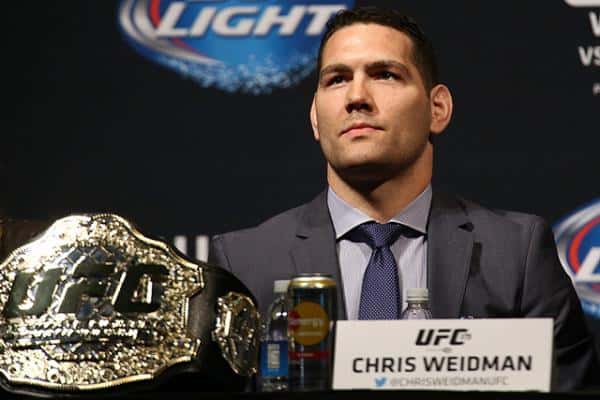 UFC welterweight prospect Stephen Thompson continued his run of impressive form last night (Sunday July 12th, 2015) as he dispatched long time MMA veteran Jake Ellenberger in the first round. The two faced off at The Ultimate Fighter 21 finals, and ‘Wonderboy’ got the win with a flashy kick to the dome that put ‘The Juggernaut’ to sleep. As well as being an undefeated (57-0) amateur & professional kickboxer, Thompson now boasts a tidy 11-1 MMA record, including a current five-fight win streak. It should also be noted that he formerly fought for Chuck Norris’ World Combat League promotion, where he ranked #1, only behind the undisputed champion of everything, Chuck Norris.

Seriously though, ‘Wonderboy’ showed he is more than a kickboxer with some MMA skills last night, and he’ll be looking at a pretty big fight for his next booking. While catching up with Ariel Helwani of MMAFighting after his big win in Vegas, Thompson was interview-bombed by UFC middleweight champion Chris Weidman, who had some big props to give the young striker:

“I am so happy for him man, I think it was a good thing that he got clipped with that shot. People got to see his wrestling and his jiu jitsu, he is a big problem for the welterweight division. None of these guys are going to want to stand with him. If anything, you would think a wrestler with power in their hands is a bad match up, and look what (Thompson) just did to him,”

That’s big praise coming from a champ of Weidman’s pedigree, and ‘The All-American’ is obviously confident in his friend’s abilities. Once back on the mic, ‘Wonderboy’ gave his take on getting rocked by Ellenberger and the eventual finish:

“You know what, I didn’t feel it. I went down and I knew that he hit me with something and my legs went out, but I just went with my wrestling. I been really working hard on that, and I felt comfortable, kept my cool and finished the fight with a spectacular knockout. I had a gameplan, and of course I have good coaches. He saw a spin hook kick, and I listen to my coaches, I hit him with the first spin hook kick and it dazed him, and I knew I could get him with it again. (My Dad) he just said ‘spin’, and I knew what to do. I want anyone in the top 10 of the division to be honest, I’m ready for it and I want to go for the title. I have an injury now on my heel from where I hit (Jake) but I want to return as soon as possible.”

Who should be next for Thompson? There are some great matches for the exciting kickboxer to consider next, but will he fare as well against the truly elite fighters of the division? One fight that could be considered, rankings be damned, is Tyron Woodley vs. ‘Wonderboy’, anyone else?