LowKickMMA.com
Home UFC News Chris Weidman Breaks Down Why He Deserves The Next Title Shot 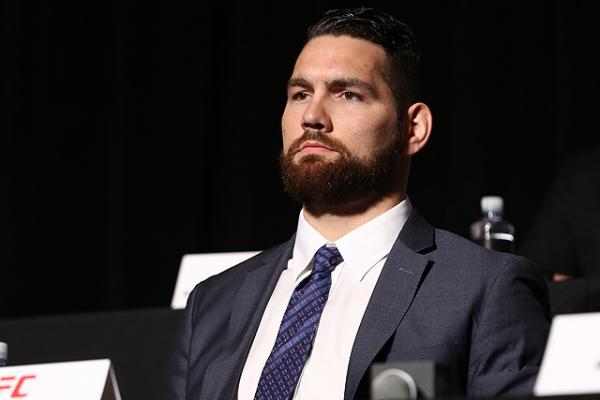 Top UFC middleweight Yoel Romero couldn’t win the interim title after missing weight for the main event of last night’s (Sat., February 10, 2018) UFC 221 from Perth, Australia, but he put about as big of a statement you could on the bout when he knocked out former champ Luke Rockhold (watch highlights here) in the third round.

The brutal stoppage came out of nowhere as many of the explosive Cuban wrestling legend’s wins do, as he blasted Rockhold above the ear with a stunning shot before landing an all-out left hand that shut off the AKA fighter’s lights for good.

It was a dominant ending in an otherwise close bout, one that should also earn Romero another shot at currently injured champion Robert Whittaker after UFC president Dana White confirmed he was next for the title shot.

However, one top-ranked former champ thinks he should be next, and he explained why online after the fight. No. 4-ranked Chris Weidman, who was cageside in Perth for the fight last night, revealed a number of reasons why he’s the most deserving contender for the belt:

Weidman is indeed in the top 5, and he racked up three consecutive title defenses during his reign from July 2013-December 2015, much more than the last four champions Rockhold, Michael Bisping, Georges St-Pierre, and Whittaker, can lay claim to with one total title defense combined.

His haters would tell you that Weidman only fought and beat aging Brazilians during his run, and indeed there may be some truth to that. But he also put together a run where he won five post-fight bonuses in six fights. Regardless, MMA is the ultimate what-have-you-done-for-me-lately sport, and Weidman has lost three of his last four bouts including knockouts defeats to Romero and Rockhold.

The 185-pound weight class had been thrown into a relative state of disarray under Bisping’s chaotic – and St-Pierre’s brief – reigns. UFC 221 was supposed to be the night that put it back on course, with Whittaker defending the title against the rightful contender in Rockhold. But Whittaker’s bouts with staph and chickenpox threw a wrench in those gears, and Romero essentially put the division back where it was last July when he faced Whittaker for the interim belt at UFC 213.

Now they’ll reportedly square off for the real belt when both are healed (Romero said he broke his leg from two Rockhold kicks), and it’s almost impossible to envision Weidman getting the next shot.

He is coming off an impressive win over Kelvin Gastelum last summer but is also dealing with a thumb injury of his own. A fight versus No. 3 Jacare Souza, who recently got back on track with a knockout win over Derek Brunson at UFC on FOX 27, is probably the most logical fight for Weidman.

Just don’t expect him to stop calling out for a title shot regardless of how many losses he has recently.