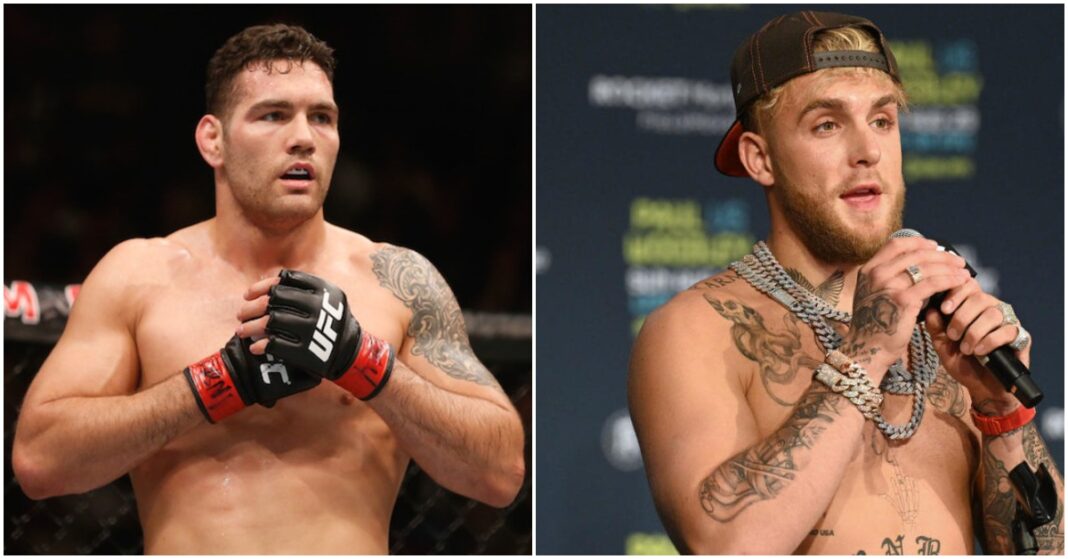 Jake Paul was able to extend his unbeaten record further following his devastating KO over Tyron Woodley. Post-fight, ‘The Problem Child’ took this as an opportunity to try and line up his next opponent calling out multiple different fighters who are currently under the UFC Banner.

The likes of Nate Diaz and Jorge Masvidal were two of the names mentioned however as many of us are aware, it’s extremely unlikely Dana White is going to allow either fighter for a one-off boxing match, especially if it doesn’t make sense financially. However, there is one name that does make sense, who is a former UFC fighter and therefore no longer under contract.

Chris Weidman believes Jake Paul should challenge himself next against an opponent who he knows very well in former UFC middleweight champion Anderson Silva. Weidman spoke on the Wont Back Down Podcast giving Paul advice on who he should face as his next opponent.

“I would love to see him fight Anderson Silva; he’s calling out all these fighters with UFC contracts. I don’t think he’s really – none of those are really going to happen at this point.”

“The UFC would have to get behind it almost like a Conor McGregor and Floyd Mayweather type match. But unless you’re drawing in $500 million like the Mayweather and Conor McGregor fights were doing, the UFC’s not doing that because they want to split it. They would split it, but if it’s not that type of money, they’re not doing it. So (we’re) wasting our time even talking about (Nate) Diaz, (Jorge) Masvidal and (Kamaru) Usman.” (Transcribed by MMA Junkie)

Although ‘The Spider’ is no longer the competitor he used to be at 46 years old, he has taken very well to boxing and his excellent technique still prevails. Silva currently holds a 3-1 record with a victory over former WBC Middleweight champion Julio Cesar Chavez Jr. Silva would put on a display in his last outing by stopping Tito Ortiz in 80 seconds back in September. Silva’s sleek striking and movement could provide Jake Paul with his biggest test to date.

How do you think a fight between Jake Paul and Anderson Silva plays out?