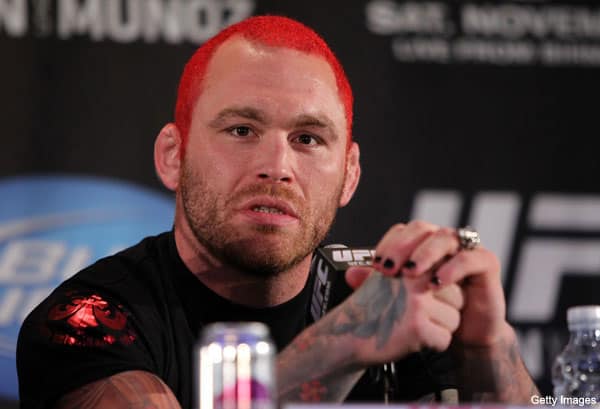 Former UFC middleweight contender Chris Leben, has announced his retirement. Leben, who is now two years sober and most recently competed in Bare Knuckle Fighting posted a YouTube video announcing his retirement and sharing a message.

“I just wanted to put out this short video and make this official,” Leben began his message with “Everybody knows I’ve been competing in bare-knuckle, and I think it’s time to retire.

“Couple reasons why,” Leben continued. “Dave Fledman has been wonderful to me. It has nothing to do with that all. It has to do the fact that, first and foremost, I’m an amateur ref here in California. I’m aspiring to go pro, I want to do that, and I feel like it’s a conflict of interest being both a referee and an athlete at the same time. I want to focus on my career as a referee. Also, I want to focus on my career as a coach, as an elite-level coach. I coach jiu jitsu, I coach boxing, I coach MMA. When I’m training, I don’t have the time to put the energy into my athletes.”

While Leben’s focus will turn to refereeing, coaching, his family, and BJJ all contributed to his decision to retire, Leben explained the way his UFC career ended also played a part.

In his final UFC fight, Leben waved off the fight after the 2nd round against Uriah Hall. As a fierce and gritty competitor as he is, Leben knew it was time to call it quits, yet still extremely disappointed with the outcome.

“Here’s the biggest thing that I wanted to talk about,” Leben explained. “My UFC career did not finish the way I wanted it to. I don’t think most people’s do, but I ended up going through a ton of struggles, both in and out of the cage, battling with addiction, battling with alcoholism. Ultimately when I came here to The Arena, I got on that path to recovery. Most people that follow me know I just got my two-year coin. So I’ve been 100 percent sober for two years now. The battle’s been much longer than that. It’s been four years that I’ve really worked at it. I’ve had two slips on alcohol in the last four years, but the last two years, I’ve abstained from any and everything, and God willing, it’s going to be that way that way the rest of my life.”

Fast forward to Leben competing 3 times in Bare Knuckle fights, first, knocking out Phil Baroni in the WBKFF ring. Then, knocked out Justin Baesman in the BKFC ring. Finally, losing very close decision to Dakota Cochrane in the BKFC ring.

While his bout with Cochrane didn’t go his way, Leben gave everything he had for 5 busy rounds. He believes this performance as a far more fitting end to his career than his final UFC fight.

“What matters is, I didn’t finish my carer on the stool,” Leben stated. “So, reflecting on it and thinking about, to be able to come back to combat sports after a lifetime of combat sports, to be able to come back, have those three fights, have that last fight be a knock-down, drag-out war, and finish it in traditional ‘Crippler’ fashion… I feel like I accomplished what I set out to accomplish.” (Transcribed by BJPENN.com)

Chris Leben is a legend of the game forever and his career should be celebrated.

What is your favorite Chris Leben Moment?