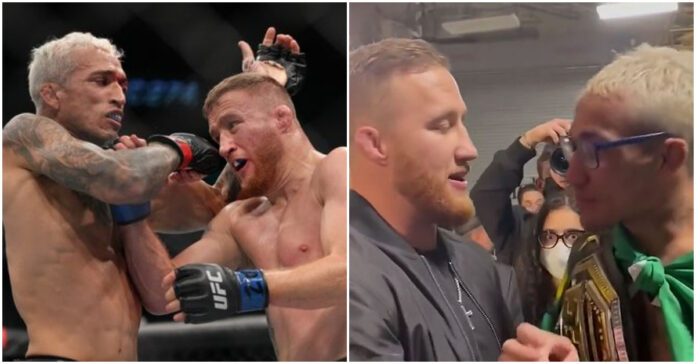 Charles Oliveira and Justin Gaethje showed a display of respect in their encounter backstage after an exciting match at UFC 274.

Going into the contest stripped of his title, former UFC lightweight champion Charles Oliveira had a lot riding on his shoulders. Knowing he wouldn’t get the strap even if he wins, ‘do Bronx’ delivered a statement win over Justin Gaethje, who was looking to snatch the promotional gold in his second attempt.

The two would later come across each other backstage when Oliveira was getting the photos taken after his winning exploits. As Gaethje walked past the victor of the night, he put his thumbs up and waved at Oliveira in a moment of shared respect. The Brazilian acknowledged the gesture and continued with the photoshoot.

After ‘Do Bronx’ stepped on the scales half a pound over the championship weight limit, he was forced to vacate his title as soon as he stepped inside the octagon. While Gaethje was eligible to become champion if he won, Oliveira would only become the top contender given he wins the bout.

Charles Oliveira now stands as the top contender for the vacant lightweight belt and it’s unclear who he’ll face competing for it. The 32-year-old took his chance to call out Conor McGregor in his next fight but received a shaky response suggesting the two will likely not see each other across the cage.

With Gaethje soundly beaten in his second run at the UFC lightweight gold, he will need to rack up some notable wins ahead to get back in the mix of title contention. Michael Chandler could be another option as he went back to winning ways after brutally knocking out Tony Ferguson. Islam Makhachev would be the probable forerunner but he will need to dispatch Beneil Dariush first to get the title fight against Oliveira.