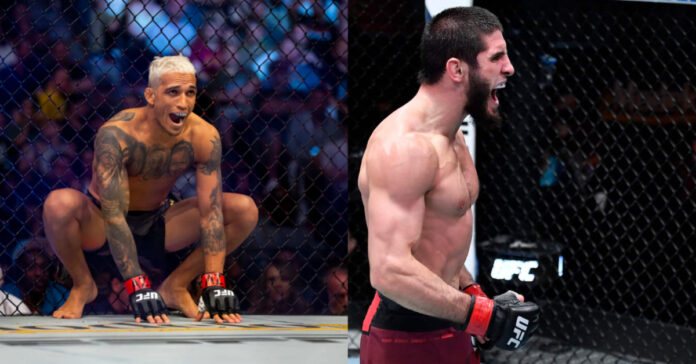 Alireza Noei has claimed that his student Charles Oliveira will face a tougher test in Islam Makhachev, who he says possesses a better wrestling ability than former UFC lightweight champion, Khabib Nurmagomedov.

UFC 280 is in contention to be one of if not the best event of this year. Stacked from bottom to top the main event will see two dominant competitors compete for the currently vacant UFC lightweight title. Charles Oliveira will have the chance to regain his lightweight title when he takes on the man who many predicted to be the next champion following Khabib, Islam Makhachev.

Ahead of their highly anticipated matchup, Alireza Noei, coach of Charles Oliveira has claimed that his students’ next opponent is a better wrestler than the aforementioned Nurmagomedov.

Speaking in an interview with PVT, Noei has stated his belief that Makhachev is a better wrestler than Khabib given that it is not the former undefeated champion’s first discipline.

“Let’s begin with the wrestling of Dagestan, Russian wrestling, 80% of wrestling of Russia comes from there. The Japanese wrestling that is called judo is also, you can ask the Judokas, Dagestan has really good Judokas,” Noei said.

“World champions, Olympic champions, just like the wrestlers. Everyone from Dagestan knows wrestling. For example here in Brazil almost half of the people know wrestling but in Dagestan, almost 100% know it, girls, women, men, everyone knows it. Even someone that doesn’t fight knows wrestling at least knows two or three wrestling coaches. Dagestan is a pool of wrestling.

There is not long left to wait now with UFC 280 less than a month away. Will Islam Makhachev fulfill his full potential and follow on in Khabib’s legacy or will Charles Oliveira make good on his word and regain his spot at the top of the division?

Who will emerge victorious in the main event of UFC 280?