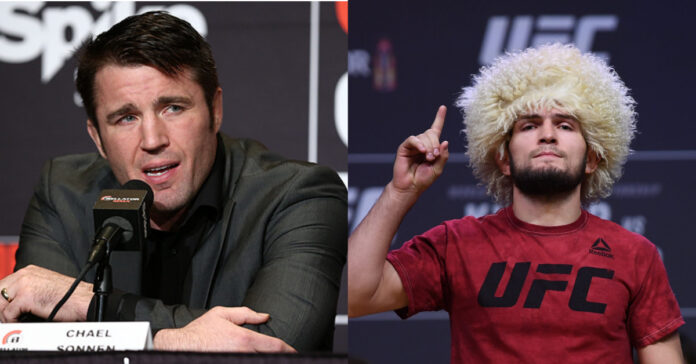 Chael Sonnen believes Khabib Nurmagomedov remains the greatest lightweight the division has seen despite the recent excellence of Charles Oliveira.

Ahead of UFC 280, Chael Sonnen has shared his thoughts on just exactly who is the greatest lightweight to compete in the UFC. A victory for Charles Oliveira over Khabib’s protégé, Islam Makhachev, would certainly help him lay claim to being the best 155-pounder the promotion has ever seen.

As it stands, however, Chael Sonnen remains of the opinion that the aforementioned Nurmagomedov holds the number one spot in the overall lightweight division.

The former UFC contender says this simply comes down to the fact that Khabib was not once troubled in a matchup during his undefeated reign.

Discussing the matter on his YouTube channel, Sonnen emphasised the point that Oliveira was moments from defeat in all of his title matchups whilst he believes the same cannot be said for Khabib.

“Forget about the 61 seconds against Poirier, forget about the four minutes against Gaethje, you can back the tape up to Michael Chandler. Every single one of those fights have a single theme – which is Charles almost lost. That’s the difference.

“Whether Khabib was a little bit slower and a little bit more steady, he was never once in trouble. Those two never met up, it was the match-up that we did even discuss. When Khabib was here, I don’t even know how close Charles was, there was still massive talk just for time frame of getting Khabib in with Ferguson. So then Charles emerged and we go ‘my god how good is this guy’ and he was here at the same time as Khabib and that is relevant.

Despite listing Khabib at the top of the rankings, Chael Sonnen also mentioned that if Oliveira continues to build upon his recent success, he very well could overtake the undefeated Russian.

“How can we say Khabib is the absolute best if we have got the guy who is next in line, he was a guy who was ranked at six or seven or eight or whatever he was. So based on what have I just told you we know there is a belief that we put Khabib at one and Charles at two but we understand that Charles can pass Khabib.” (Transcribed by Mirror)

As it appears Oliveira is feeling very confident ahead of his title matchup going as far as saying that he will defeat Makhachev in the first round.  If he is able to do so it would surely force Sonnen and others who agree with his sentiment to reconsider exactly who is the greatest lightweight to ever compete in the promotion.

Who do you consider the greatest lightweight to ever compete in the UFC?