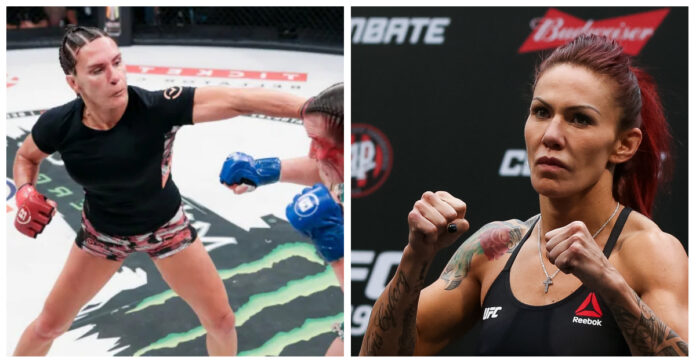 Cat Zingano has called for a shot against Bellator MMA champion Cris Cyborg.

This past Friday, Cat Zingano extended her win streak to three with a dominant performance against Pam Sorenson at Bellator 282. The women’s featherweight contest took place on the preliminary card at Mohegan Sun Arena in Uncasville, CT. Although Zingano had a point docked for an illegal knee, she would adjust her game plan accordingly to secure the victory.

At the post-fight press conference, Cat Zingano reflected on her performance and shared her thoughts on what went inside the cage that night.

“I’m happy with the performance,” Zingano told MMA Junkie after the fight. “I feel like I was very dominant. I get (to top position on the canvas) a lot and I stay there a lot, and I feel like I cause a lot of damage. It’s a very comfortable, happy place for me. I feel like I want to be doing more.”

“I feel like I got some really good head kicks off on her and at one point, I watched one land and as I turned away, I just watched her head start dripping. I’m like, ‘Damn, she’s got a chin. That didn’t do anything but cut her.’ I cut her again and I cut her again, and it still wasn’t fazing her. … Once I hurt my knee, it was just top game and try to cut her up and see if I can get a finish from there.”

Zingano wants to fight Cris Cyborg for the title

She expressed her interest in competing against Cris Cyborg for the Bellator women’s featherweight title. ‘Alpha’ believes the long-awaited shot that was brought up multiple times in the past is ready to come to fruition.

“I do (think I should get a title shot),” Zingano said. “I feel like I’ve done a good job moving up the ranks in Bellator and getting the experience. The environment is here. Me and Cyborg are here. We’ve both been talking about each other for quite a while. Putting it together obviously makes a lot of sense.

“I think we have very different styles, and different styles make awesome matchups. I think that’s cool and I think it’ll be interesting. We’re both OGs and we both came from training in the same kind of hard-knocks environments to come up and still figuring it out and making it happen.”

Would you like to see Cat Zingano fight for the title against Cris Cyborg?