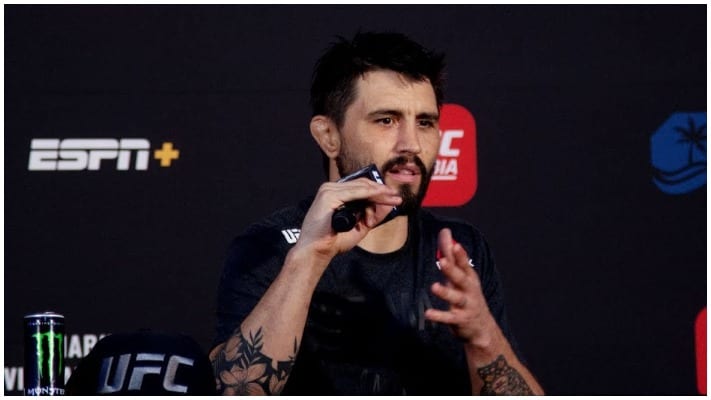 Former interim welterweight champion Carlos Condit got back to winning ways in impressive fashion last night and is now eyeing fights against his long-time rivals Matt Brown and Nick Diaz.

Condit went into his fight against Court McGee at UFC Fight Island 4 on that back of five straight defeats. The 36-year-old hadn’t tasted victory since beating Thiago Alves all the way back in 2015.

‘The Natural Born Killer’ showed no signs of poor form as he dominated McGee over three rounds, even dropping the former TUF winner with a huge, nose shattering hook at the end of round one. Condit ultimately picked up a unanimous decision win before facing media who were keen to hear about who the long-time welterweight contender wants to face next.

Matt Brown immediately took to Twitter post-fight and called for a bout against Condit. The reporters in attendance mentioned ‘Immortal’ and the soon to return Nick Diaz as potential opponents to Condit who seemed ready and will to fight whoever the UFC put in front of him.

“Either one,” Condit said. “Yeah, I mean there are a number of match-ups that are intriguing. (Nick) Diaz, Matt Brown – we’ve been slated to fight several times. I don’t know, we’ll see.

Condit has been scheduled to face Brown twice before but the fight has fallen through. ‘The Natural Born Killer’ was asked if that face would make him hesitant to sign to fight Brown a third time.

“No. Not necessarily,” Condit replied. “But, you know, bubble wrap that dude up. So we make it to the f*cking fight.

Who do you want to see Carlos Condit fight next?