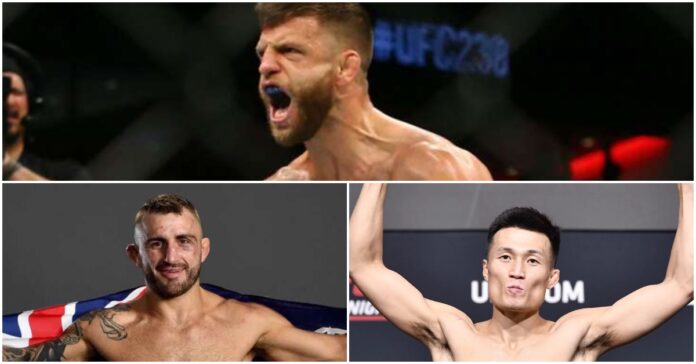 ‘The Boston Finisher’ plans on staying in fighting shape, in hopes that someone pulls out of the upcoming Featherweight title clash set for UFC 273.

Despite coming off a five-round slugfest win over the ascending Giga Chikadze (14-3 MMA) at UFC Vegas 46, – which was the first fight card of 2022 – Calvin Kattar (23-5 MMA) plans on asking the UFC if can be the first reserve for Alexander Volkanovski’s third featherweight defence against Chan Sung Jung on April 9th.

Kattar mentioned to Michael Bisping on the ‘Believe You Podcast’ that he’s just waiting for the UFC to let him know.

“In my head, I’m planning on (being) the replacement. It’s not happening yet, but they said they’re gonna let me know as a replacement for Volkanovski and ‘Zombie,’ so staying ready for that.”

“I’d like to. I mean, why not? It can’t hurt. I’m waiting to get an OK from the UFC. If that is the case, they’re gonna let me know in a certain timeframe. But once they do, if they let me know – and even if they don’t, in my head, it’s like try to chase that dog with a bone. If something happens, they’re gonna want me so keep my ass in the gym, stay ready. Just another reason to focus on it and get ready for something and have something to compete for.” (Transcribed by MMA Junkie)

How does Kattar see UFC 273 playing out?

Alexander Volkanovski (23-1 MMA) was originally scheduled for his trilogy bout with former Featherweight Champion Max Holloway, however, ‘The Great’ was drawn up against the ‘Korean Zombie’ as Holloway was forced to pull out due to a re-aggravated injury.

Calvin Kattar was not impressed with the UFC’s re-draw, as he believes it to be underwhelming as he believes there were better fights on the table for the defending champ.

“It’s not the fight that we asked for or wanted, but it’s the one we’re gonna get. Hopefully it pans out,” Kattar said. “I think it’ll make for an exciting matchup for sure. I don’t think those two guys could be in a fight without being exciting. You would think the champ, right? We’ll see what ‘Zombie’ does.”

What do you think Calvin Kattar has to do to deserve a title shot?