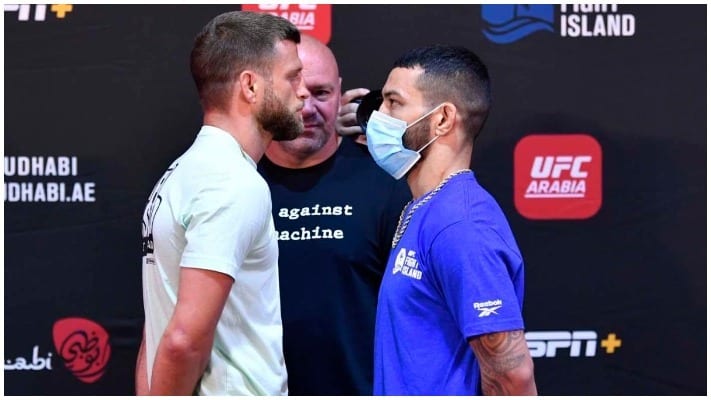 IT’S TIME! The UFC Fight Island 1 main event is finally upon us. Featherweight contenders Calvin Kattar and Dan Ige will square off for five-minute rounds. The winner will move one step closer to a shot at 145lb champ Alexander Volkanovski.

Round 1: A tentative start to the fight. Both men are taking their time. Dan Ige eventually wades in with some looping hooks which dont really land. A little break in the action before Ige rushes in again with no luck. Calvin Kattar appears to be trying to time him opponent but isn’t throwing much yet. Ige lands a body shot but eats a hook for his troubles. Kattar lands to the head and body. Ige doesn’t like it and shoots for a takedown. He drive Kattar across the cage but isn’t able to get it. Ige is on his back. Kattar contemplates jumping in with ground strike but ultimately lets his opponent up. This fight is really catching fire now. Both fighters are landing beautiful strikes. Kattar with the more eye catching stuff but Ige is sticking with him. Kattar leaves himself wide open and eats a right hand for doing so. It doesn’t both him thought and he jumps in with a flying knee and follows up with punches as the round ends.

Round 2: Another slow start to the round. Lot’s of movement from both men just not a lot of action. Ige lands to the body – lovely shot. One-two straight down the pipe from Kattar. Ige tries to loop in with a right hand but eats one right down the middle again. Ige lands big! This is really a back and forth fight. To the body and to the head from Ige. Kattar is bleeding heavily from the nose, it appears to be bothering him. Back-to-back jabs from Kattar who’s had a tough round two so far. They begin exchanging shots in the middle of the cage. Ige stumbles backward and Kattar throws a flying knee which just misses the mark. The fighters posture and feint as round two ends.

Round 3: Kattar is getting aggressive at the start of round three. He is back up his opponent. Throwing lots of punches and kicks to every section of Ige’s body. Ige responds though. A beautiful shot to the body. He i waiting for Kattar to jump in and then countering him with good head strikes. Huge body shot from Kattar. Ige eats it. Kattar is really getting after it now. He certainly has the heavier hands but Ige is matching him for volume. Ige has huge swelling over his eye and it seems to be bothering him. The round ends with Kattar stalking his opponent.

Round 4: Big swing to the body from Ige to open up the round. He shoots for a takedown and almost take it to the mat. Huge right from Kattar. Ige is so tough to take it. They clinch and Kattar ends up in top position. He’s landing ground and pound. Kattar backs away and lets his man back up. Ige is winding up with big punches and elbows looking for the knockout shot – so far he hasn’t been able to land. Inside low kick from Kattar. Ige returns with a hook followed by a body shot. Kattar is the fresher fighter towards the end of round four. He is stalking Ige and begins to open up with shots but the bell sounds to end the round.

Round 5: Both guys swinging big at the start of the final round. Lot’s of strikes missed but Kattar lands an eye-catching right hand. He pops out a nice jab too. Just as one many seems to be taking control the other fires back. Ige seems to have got his second wind now. Lot’s of good strikes starting to land for him. Ige shoots for a takedown but Kattar does very well to defend. Ige’s right eye is almost swollen shut now, it looks nasty! Body shot from Kattar. Ige comes forward catches Kattar on the end of his flurry but it doesn’t make an impact. Kattar defends another takedown. He lands a big knee. Ige is on the floor eating shots as the buzzer sounds to end the fight.