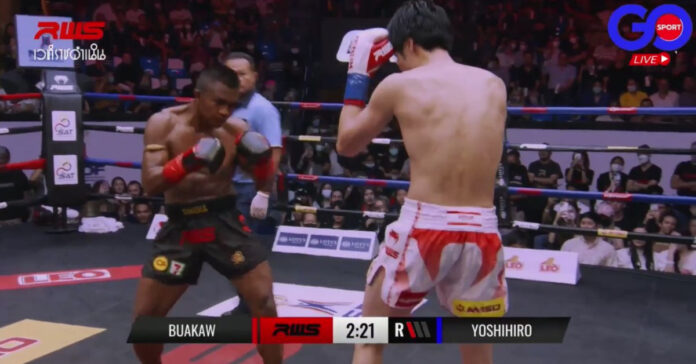 Sato had been the only boxer to stop Buakaw when the pair met in 2008 at the K-1 Max: World MAX 2008 tournament. Since then, the pair had gone down different routes with Sato having not competed since 2015 prior to this matchup whereas Buakaw’s activity had only increased.

The two men had met four times previously before this matchup with the Thai fighter emerging victorious on three occasions having already finished Sato in one of their previous meetings.

And it would be Buakaw who was victorious once again, the bout did not last long with both men exchanging fierce punches and kicks before Buakaw would land a shot that put Sato on the floor.

Buakaw Banchamek Calls For Greater Challenge In His Next Matchup

Speaking to the media post-fight, Baukaw revealed that he had expected himself to be involved in a much tougher matchup and had trained himself in preparation for such a thing.

His opponent Sato had not competed for nearly eight years however he told the media that he had continued to train during this period but unfortunately came up short on the night.

It is unknown where Sato will go from here however it seems that Buakaw already has his next matchup scheduled.

According to Tapology, Buakaw Banchamek will face Saenchai ‘King Star’ Saenpong in a main-event matchup at a Bare-Knuckle Fighting Championship card scheduled to take place in March of 2023. Both men are perceived as ‘Muay Thai Legends’ having a combined 600 plus matchups competing within the sport. This will be the first occasion for Saenpong to compete in BKFC.

Whether the Thai legend will have another fight prior to this matchup is still undecided.

How much are you looking forward to this battle of two legends?