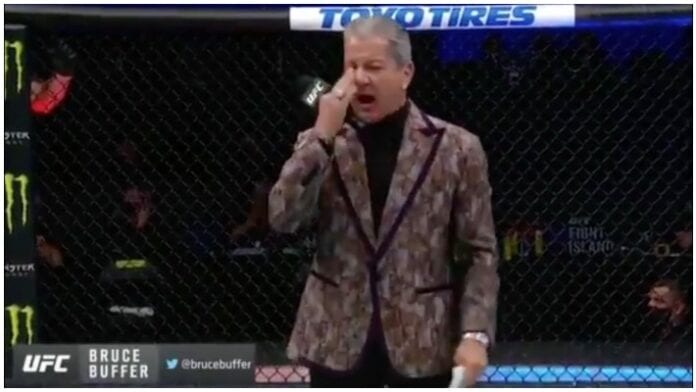 UFC Fight Island 7 kicked off a new year of MMA in glorious fashion, with the legendary Bruce Buffer announcing us in to a new season of fights.

Max Holloway put on one of the most masterful showcases ever seen in the sport. His unanimous decision victory over Calvin Kattar was a sight to behold. The headliner was also accompanied by exciting bouts on the main card. With legends Matt Brown and Carlos Condit fighting an impressive three-round war, whilst Li Jingliang forced himself into the welterweight rankings, after KOing the retuning Santiago Ponzinibbio.

However, one of the most exhilarating fights on the night didn’t even include signed UFC fighters. In what was a relatively tame set of preliminary bouts, with each fight going to decision, it was Bruce Buffer who truly stood out. As the Buff was in full flow, announcing the start of the third instalment Fight Island events, the local wildlife took objection. The fly struck first, though masterful head movement allowed Buffer to avoid any serious damage. Then a rapid right hand from the Buff meant that it was lights out for his opposition.

The reply of the bizarre moment can be seen below.

Funnily enough, Buffer has dabbled in the martial arts before. However, he has of course since transitioned to the voice of the Octagon.

What are your thoughts on the bizarre encounter involving Bruce Buffer that preceded UFC Fight Island 7?