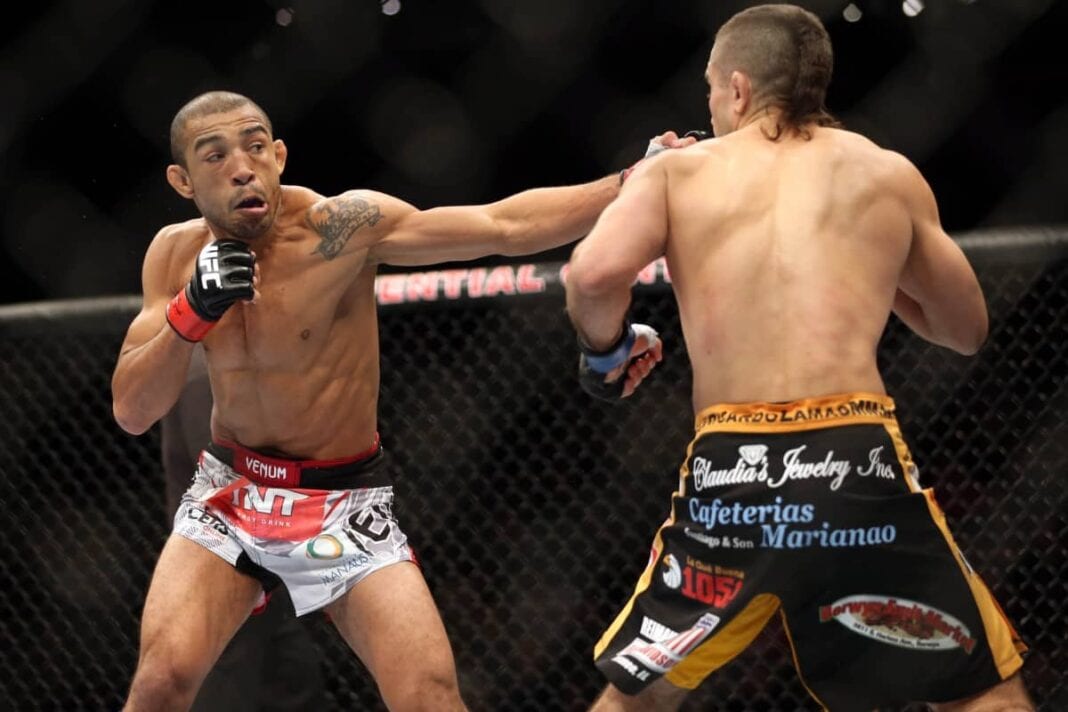 With just over two weeks left until the biggest fight of the year, fans are still not completely sure that Jose Aldo will show up to UFC 189 on July 11, 2015 to defend his featherweight title against Irish sensation Conor McGregor.

When reports surfaced of a possible rib fracture to Aldo that was then switched to a bone bruise, Aldo stated that he still planned on fighting, with the UFC bringing in Chad Mendes as an emergency standby. However, it was reported most recently that “Scarface” indeed fractured his rib, leaving fans unsure of whether the mega fight will go down.

The situation has been the hottest topic in mixed martial arts (MMA) this past week, with many analysts talking about the situation. Former fighter turned analyst Chael Sonnen recently said that Aldo would lose millions if he didn’t show up to fight, and it seems as if another former fighter turned analyst in Brian Stann believes that money is the exact reason that the champion will indeed show up on fight night:

“I think he makes the walk based on the financial impact alone,” Stann told MMA Fighting. “”Here’s the positive things for Jose Aldo going into this fight: This fight is going to make him an awful lot of money — win, lose or draw. He’s the only featherweight champion in history. I think he merits, no matter what, an immediate rematch if he were to lose this fight. For him, he takes the fight, there’s already a built-in thing where if the performance is terrible people are going to point to the ribs first. And there’s great build-up for a rematch and he’ll get another great payday.”

However, it may not be Aldo’s decision. If the injury is as severe as it seems it could be, the Nevada State Athletic Commission (NSAC) may hold “Scarface” back from fighting, leading Stann to say that trainers, camps, and managers have to watch what they say regarding a potential injury:

“This is a lesson for fighters, training camps, coaches, managers: You gotta keep your mouth shut,” Stann said. “Someone really let him down in this fight. I’ve seen this happen before, never in such a high-profile fight. I don’t know who it was. It’s not indicative of the type of environment that Nova Uniao provides. It could happen anywhere, but someone really let him down that should have kept their mouth shut.”

Although Stann feels as if Aldo should and will show up, UFC Tonight co-host and a former opponent of Aldo, Kenny Florian, believes that there is too much risk for the champion. Speaking on his weekly podcast with Jon Anik, “KenFlo” stated that the fact that McGregor knows about the injury puts “Scarface” at a serious disadvantage:

“Here’s the problem of why this fight may not come together is also the fear. You know as a fighter, yeah, we go into fights having bumps and bruises and injuries and different things like that. But the fact that Conor McGregor knows exactly what the injury is, where it is, and all the other issues makes it very difficult for a fighter like Jose Aldo, with so much on the line, to go in there and take that risk.”

Based on the “Notorious” one’s devastating striking skills, Florian believes that it is too big of a risk for Aldo to step into the cage with an injured rib:

“At this level, man, if I’m Conor McGregor I’m salivating! Knowing that Jose Aldo would have come into this fight with a bad rib injury I’m going to attack it all day. You know all’s fair once that bell rings and you’re good to go, all is fair and as an opponent you know whatever… it’s not cheating once you’re in there. If you know that part of the body is injured you can attack it, it’s simple as that. And I think that is where the struggle was partly with Jose Aldo in his camp and whether they’re going to take this fight or not. Everybody knows where the injury is and Conor McGregor is a devastating body puncher and obviously an awesome kicker as well. So, a lot of risk there.”