LowKickMMA.com
Home UFC News Brian Ortega Wants To ‘Run That S–t Back’ With Holloway After Title... 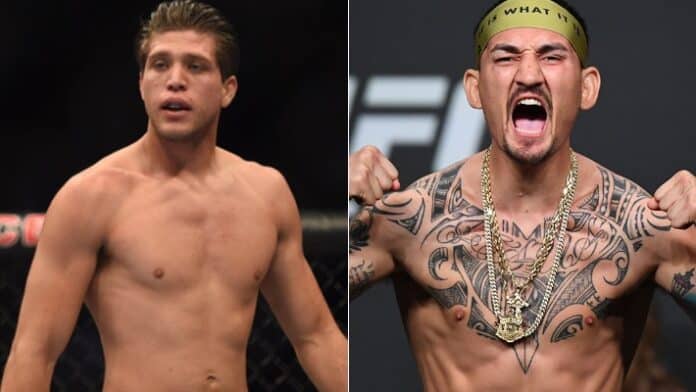 With a title fight at UFC 266 looming, Brian Ortega already knows who he wants his first title defense to be against.

Ortega meets Alexander Volkanovski in the main event of UFC 266 for the featherweight championship. He does so on the back of an impressive performance against longtime contender Chan Sung Jung. However, in his fight prior to that, he hit a major roadblock in his first title opportunity opposite Max Holloway.

Holloway pieced up Ortega for the duration of the fight, landing 290 significant strikes before the bout was mercifully called to a halt between the fourth and fifth rounds. Ortega showed off a significantly improved stand-up game against ‘The Korean Zombie’, and he told TMZ Sports he believes that – combined with his incredible ground game – will be enough to pick up the victory over Volkanovski (h/t MMA Fighting).

“I see the game, I play the game,” Ortega said. “I’m climbing this technical mountain, to speak. These guys are already there. They’re far beyond me, I admit that, like some technical s–t. But when I get in there, I’m different. There’s some things you can’t teach through technique. On the spot, on the go, when I’m in your face, when I touch you, when I hit you, I make you feel different things. That’s always been my advantage, and now that I’m adding technique to it, I’m climbing, I’m climbing, I’m climbing, I’m learning. I’m only getting more dangerous.”

The loss to Holloway still stands as the only one in Ortega’s career, and he hopes that once he wrestles the belt away from Volkanoski, he will have the chance to redeem that blemish.

“That would be ideal,” Ortega said. “I’m not trying to speak ahead or get past Volkanovski because he beat Max twice, so I’m not here to already start celebrating but that would be ideal. I’m a better person, better fighter than I was when I fought him and watching his last fight, so is he. You always want that. As a fighter, as a competitor, you always want to make that s–t square or to say, ‘Yo dog, you know what? You legit got the best of me. Good s–t.”

While Ortega has certainly improved his striking game since their first meeting in 2018, it can be argued that so too has Holloway. The 290 significant strikes he landed against Ortega was a UFC record, but he since shattered his own watermark by landing 445 against Calvin Kattar. Still, Ortega is willing to see who has really improve the most since their first meeting, and it doesn’t matter to him how many times it takes to get that one back.

Do you think Brian Ortega is overlooking Alexander Volkanovski? Who wins the rematch between him and Holloway?