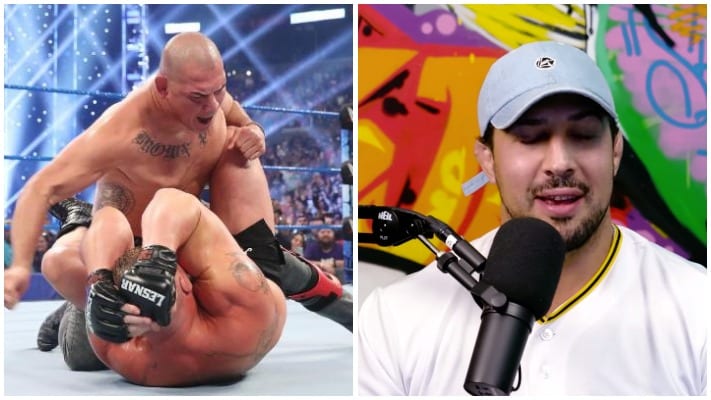 Velasquez recently shocked the pro wrestling world by appearing on WWE SmackDown and confronting Brock Lesnar. It was later revealed that he had signed a multi-year contract with the organization and had retired from the UFC.

To make things even more official, Velasquez was even removed from the United States Anti-Doping Agency drug testing pool.

And according to Schaub, that can only mean one thing as he believes everyone is on steroids in the WWE:

“I hate to do this, but WWE fans, every single one of your favorite wrestlers is on steroids,” Schaub said on his podcast (via MMA News). “If you’re gonna play ball, you gotta get dirty. And that’s just part of the game. Why wouldn’t you be? Who gives a f*ck?

“Why wouldn’t you be? There’s no difference between what they’re doing and what Hollywood’s doing. If you get a call to be Batman, you better juice the f*ck up and be Bruce Wayne. What are you doing? No one actually looks like Bruce Wayne.”

Schaub would then add that he expects Velasquez to follow suit. And given the fact that Velasquez has never really looked jacked in the UFC, it would be easier to tell now that he’s in the WWE:

“If you’re doing WWE, juice the f*ck up,” Schaub explained. “Look like a superhero. You’re on the road 300 days a year, especially with Cain and his injuries, good for him. We’ll see what’s up because he’s never been like jacked.

Do you agree with Schaub?