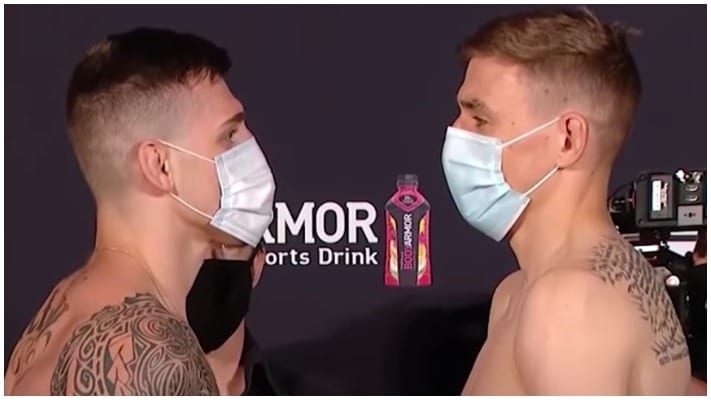 Next up on the UFC Vegas 4 main card at the Apex facility is a middleweight encounter between Brendan Allen and Kyle Daukaus.

Round 1: Allen misses a right hand. Daukaus lands a heavy body kick and lands a left hand soon after. They clinch up. Allen lands a body kick. Daukaus goes for the takedown but it’s defended as he has Allen up against the fence. Allen lands a big knee which drops Daukaus and has him mounted. He has the neck but Daukaus defends well. Allen still has his back and is landing heavy ground and pound including an elbow that cuts him open. Daukaus explodes and now has Allen’s back. However, Allen reverses and ends the round on top.

Round 2: Daukaus opens the round with some good striking but receives some of his own before he gets taken down by Allen. Daukaus eventually reverses and is in the half-guard position on top. But as is the theme in this fight, Allen reverses and lands some big shots. He looks to take Daukaus’ back but the latter escapes. Allen ends the round by dropping Daukaus with a left hand.

Round 3: Daukaus lands a nice combination on the feet and looks for the takedown soon after. Allen is taken down but looks to reverse with a guillotine attempt that fails as Daukaus is in his guard. Daukaus eventually gets his back and has the body triangle locked in as he looks to sink in the rear naked choke. Allen reverses and now has Daukaus’ back. They both scramble with Allen ending the fight with strikes. This was a proper scrap!