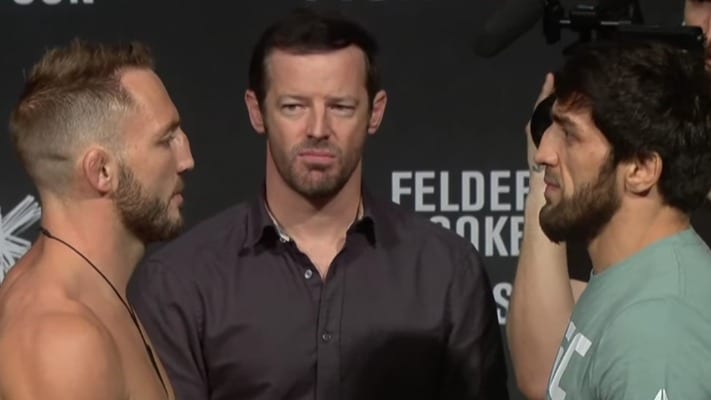 Kicking off the UFC Auckland main card is a lightweight bout between Brad Riddell and Magomed Mustafaev.

Round 1: The two feel each other out. Mustafaev opens with a head kick that is blocked. Riddell misses his own head kick. Riddell drops Mustafaev with a right hook! The New Zealander looks to finish but Mustafaev counters with a leg lock. Both fighters get up with Mustafaev landing a takedown soon after with Riddell getting to his feet. He has Riddell’s back and takes him down again. The sequence is repeated with Mustafaev now landing knees to the back of Riddell’s thighs. He lands a knee on Riddell’s head and a couple to the stomach. Riddell is struggling to separate from Mustafaev’s grip. He eventually does with just over 20 seconds remaining and attempts his own takedown. He fails and the two end the round standing apart from each other.

Round 2: Riddell lands a big right hand and follows it up with a leg kick. Mustafaev slips while attempting a kick but gets back to his feet. The two exchange strikes. Riddell lands another leg kick. Riddell closes the distance to land some strikes but Mustafaev isn’t hurt. Mustafaev partially blocks a head kick. Mustafaev lands a huge right hand but Riddell seems unfazed. The two continue to strike while maintaining range. Mustafaev takes Riddell down as the latter was attempting a body kick. It’s back to a clinching contest with Mustafaev applying the pressure. Mustafaev eventually takes him down but only momentarily as Riddell looks to get right up. Mustafaev ends the round in control.