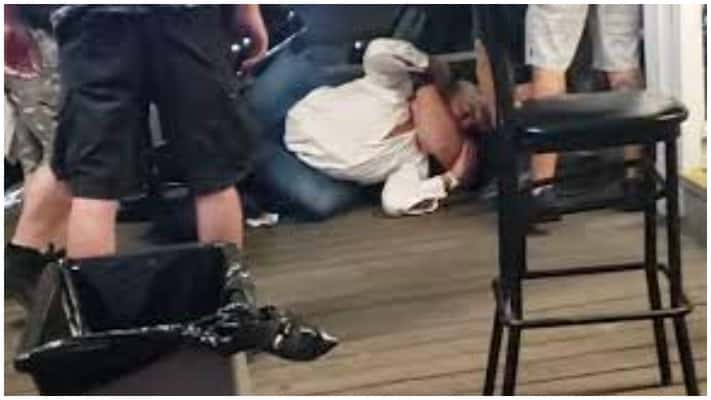 A bad night got worse for Danis when footage of his arrest began to circulate online. The clip showed the BJJ specialist being choked out by an anonymous security guard before his arrest.

The man who subdued Danis has now revealed himself and recalled the incident that led to him taking the MMA fighter down.

“I’m like, ‘Sorry, bro, you’re not getting in. I need an ID.’ And then he says, ‘Oh, you don’t know who I am?’” Chance The Bouncer recalled while speaking with Al Iaquinta on the Call Me Al Show. “And I was like, ‘Sorry, dude, I don’t know who you are. I need an ID.’ So then he Googles himself and shows me the Google page, and I’m like, ‘That’s not an ID, bro. I need a driver’s license, passport, something so I know how old you are.’ After that he started getting a little agitated or whatever that I didn’t know who he was and stuff.”

Chance revealed at this point another bouncer entered the situation and it quickly escalated to a physical altercation.

“That’s when (Danis) is like, ‘Don’t touch me, don’t touch me,’ blah, blah,” Chance said. “While they’re having their whole conversation, I walk behind these guys. And that’s when Dillon tried to throw a punch.”

“It wasn’t a great punch,” Chance added with a laugh. “He tried throwing a punch, missed it, and that’s when I grabbed him by his neck, pulled him down.

“Usually whenever I do that, I’m legitimately choking you out for a second or two until you realize the situation you’re in. In the video, you see him tap and everything, and I was like, ‘You all right, man? You good?’ And he gives me like a little thumbs up, so I just bear-hugged him a little bit until the cops got everybody else under control and could give me a hand.” (Transcribed by MMA Junkie)

Do you think Chance the Bouncer handled the Dillon Danis situation well?