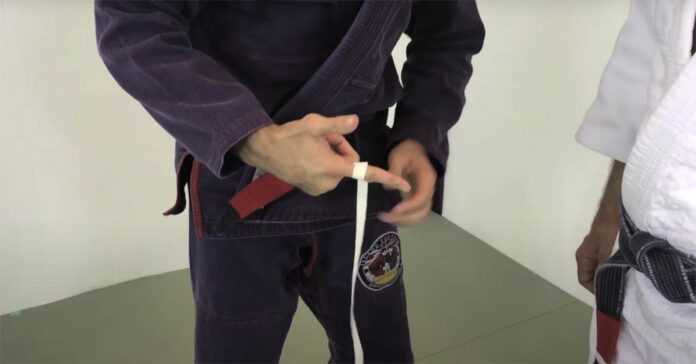 If you train Jiu Jitsu in the Gi, at some point, you will damage your fingers from gripping. That’s when you’re going to need some tape to wrap up your fingers and keep training.

Why Do BJJ Athletes/Practitioners Tape Their Fingers?

Practicing Jiu Jitsu can be harsh on your body, especially your hands, if your game involves Gi grips. The constant act of taking grips while pushing and pulling your opponent is incredibly taxing on your fingers.

All of the impact of these movements is absorbed by the small joints in your fingers. Often leaving them swollen and leaving you unable to take grips without being in pain.

That is why many who practice Jiu Jitsu training have to do BJJ finger taping. By taping their fingers, it relieves some of the pain while providing extra support to their damaged fingers. Allowing them to train with less pain and take grips on their opponents with no problem.

Are There Any Other Styles of Grappling That Use Finger Tapping

Finger tapping isn’t only used by those that practice Jiu Jitsu in the Gi, but in all forms of grappling. Your fingers are liable to get damaged in any type of grappling where you have to be constantly grabbing an opponent.

The practice of finger tapping is used just as much in Judo as in BJJ, and maybe even more so. In Judo, getting grips on your opponent is everything and your fingers will take heavy damage.

For this reason, Judokas use the same finger-tapping methods as those who practice BJJ.

While those that practice No-Gi Jiu Jitsu or wrestling don’t wear Gis, their fingers are still prone to damage. Jammed fingers or dislocations are a common injury for those that practice these forms of grappling. It isn’t unusual to see a wrestler or No-Gi grappler’s fingers taped up.

Ways To Prevent Damage To Your Fingers

If you train grappling for years, your finger joints will become swollen and not pretty to look at. It’s an inevitable outcome to gripping and something you’ll have to deal with in the future.

But there are preventative measures you can take, so you don’t have to tape your fingers constantly. Here are some methods to implement that will help you avoid BJJ finger-taping.

Don’t Always Use a Death Grip

Beginners often damage their fingers by keeping a constant death grip on their opponent’s Gi. Constantly using this force will eventually wear out your fingers and damage them.

Instead of always holding your Gi grips tight, hold it just tight enough to keep your opponent in place. Also, make sure that you’re holding enough material to keep a solid grip.

Know When to Let Go

Along with holding a death grip, many newer BJJ practitioners don’t know when to let go of their grips. They’ll try to keep them even when their opponent attempts to break them or turns at an odd angle.

Being stubborn and trying to keep a grip will often lead to finger injuries like dislocations and breaks. That’s why you need to learn when to let go of a grip when you’re losing it and try something else. It’ll prevent you from severely damaging your fingers and forcing you off the mat.

Be Mindful of Teammate’s/Opponent’s Gi

Before beginning a roll and taking grips, you must be mindful of the type of Gi your opponent is wearing. If they’re wearing a thick old-school Gi, those are harder to grip and harsher on your fingers.

You’ll have to be more strategic when trying to grip a thicker Gi and know when to let go.

If you have weaker hands or are prone to hand injuries, you may need to alter your Jiu Jitsu game. Instead of relying on Gi grips, rely more on wrestling hand grips to control your opponent. Your fingers will take less damage by going with this approach.

There are various methods for tapping your fingers depending on how many knuckles are injured. Here are three BJJ finger-taping methods you can use to protect your fingers.

Three-knuckle tapping can be used if all three joints of your finger are hurting or damaged. First, get finger or normal medical tape and cut it into smaller strips. Either type is widely available on Amazon.

Start at either your top knuckle or bottom knuckle to start the wrapping process. Go around the first knuckle and then work your way to your middle knuckle.

Repeat the same process by wrapping around your middle knuckle and then going to the last one. Once you wrap the tape around your last knuckle, you will go back up or down (depending on where you started).

When you do this, it makes x-shapes between your knuckles. These Xs work as mini braces for your joints to give them extra support.

Make sure you don’t wrap too tight to cut off circulation when you wrap your fingers. Also not too light to where your joints don’t have support.

Another single-finger wrap method you can use is the two-knuckle wrap. Start at the bottom or top knuckle and wrap around two times.

Next, take the tape past your middle knuckle and repeat wrapping around the next knuckle two times. After wrapping this knuckle twice, bring it back up(or down) to make an x-shaped brace.

Finish the wrapping process by going back up or down your fingers to make your x-shaped brace.

This video shows you how to do all three of these methods above.

How To Tape Your Thumb

Injuring your thumb is just as common as injuring your other fingers. Although, the BJJ finger-taping methods above won’t work on your thumb since it’s opposable.

For a mildly sprained thumb, you can use this method where you anchor your thumb to your wrist. Start by wrapping wider medical tape around your wrist 1-2 times.

Use 4-5 smaller strips to connect your thumb and wrist together firmly. Then, to finish the process, take a larger strip of tape and tape over the smaller pieces.

Start the process by wrapping one strip around your thumb and then another around your index finger. Next, take another strip and wrap it around your finger and thumb to connect them.

From there, you will take multiple small strips and tape them around the base of your thumb. Place your first strip under the piece connecting your index finger and thumb.

After that initial piece, put the other pieces of tape on top of the connecting piece. Be sure to pull down firmly to bring your thumb closer to your index finger.

You can leave it as is or wrap a larger piece of tape around your wrist to cover the smaller pieces.

How To Tape Your Toes?

Just like your fingers, your toes can also take a beating from BJJ training. Here are two methods for tapping your big toes and smaller toes

Next, wrap another strip of tape around the center of your foot. Then, take 3-5 smaller strips and connect the two initial strips together.

This will provide optimal support and stabilization for your big toe.

Since your toes are way smaller than your fingers, the taping process is simpler. You can either wrap a single toe or connect two together if more

To wrap a single toe, all you have to do is wrap around it 1-2 times to give it support.

You can connect two toes together with tape for a more severe toe injury. Just wrap around the toes 1-2 times and that’s it.

Will My Fingers Get Damaged Training BJJ?

If you’re new to BJJ training or want to start, at some point, you more than likely will injure your fingers. That is just the unfortunate reality of the martial art or in any form of grappling, but especially BJJ.

The only thing you can do is be prepared when you injure your fingers. Have some tape ready and follow our guide for BJJ finger taping. You’ll be back on the mat and training with no problem.