MMA fans around the world were told earlier this week that BJ Penn and Frankie Edgar would face off as TUF coaches next season, a decision that left many of us stumped. Mainly because Edgar holds two victories over Penn, both within five months of each other, but also because Penn is without a win since 2010. 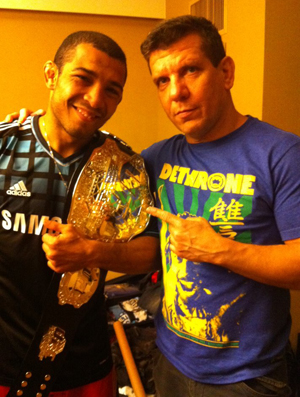 Edgar recently pulled himself out of a three-fight tailspin, decisioning Charles Oliveira at UFC 162, and maintaining his high ranking at 145. Penn will be dropping to make Featherweight, and will likely be fighting to decide whether he will be able to remain an active UFC fighter. Another loss would surely mark the end of his illustrious career.

Penn will need to bring something new to the table in his trilogy-making bout with Edgar, especially seeing as ‘The Answer’ had too much speed for Penn at Lightweight. Edgar is a lot faster at Featherweight and Penn has been out of action for almost a year already.

So what is Penn’s plan you ask? The Prodigy is going to be training under Andre Pedernaires, along side Jose Aldo for his next fight. Check out what Pedernaires had to say via Sporttv.globo.com:

“It was a honor to receive this invitation,” Pederneiras said. “B.J. and his brother are really close. He is really excited and motivated with his fight against Edgar. It’s going to be a great opportunity for me to show my work as a coach to the audience outside of Brazil, which is not used to see my work closely.”

Pedernaires, one of the founding members of the Nova Uniao fight team, trained under legendary Jiu Jitsu master Carlson Gracie and trained BJ Penn in the art himself.

Penn was awarded his Black Belt by AP while training at Nova Uniao back in 2000, before he had even set foot in a pro MMA cage.

“We’ve studied Edgar’s game a lot for Aldo’s fight,” he said, “so I believe there’s no better place and sparring better for B.J. to come back in great fashion and motivated.”

When Penn is motivated and in shape, he is a scary fighter. He cleaned out the UFC 155 division in savage fashion during his prime, and if he can get back to his best; Edgar might just get ran through.

On the other hand, Penn is 34 and his last showing against Rory MacDonald was very hard to watch. If Penn is truly past it, the fight with Edgar may also be just as hard to watch.