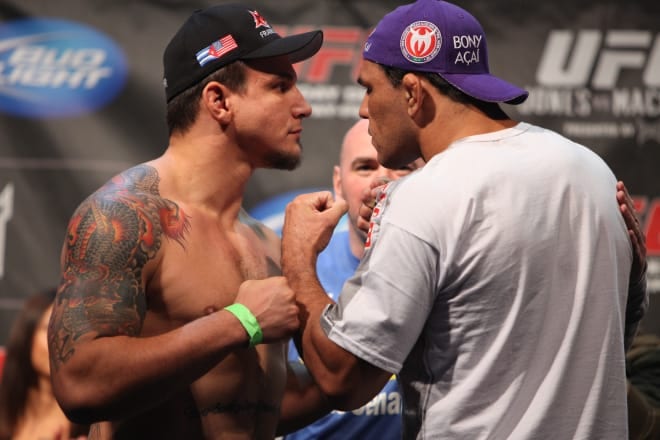 Fans of UFC heavyweight Antonio Rodrigo Nogueira have certainly had a hard time watching the Pride FC legend in recent outings; going 2-4 in his last six fights, “Big Nog” is coming off the back of two particularly harsh finishes. After tapping out to Fabricio Werdum in mid-2013, Nogueira returned at Fight Night 39, only to get starched in one round by Roy Nelson.

Time seems to have crept up on the 38 year-old MMA legend, but he still feels that he has unfinished business with his old rival Frank Mir. Speaking to Globo, transcribed by Bloodyelbow, “Minotauro” says he wants a trilogy maker with the man who finished him twice in the UFC:

“I’m ‘choking’ about (Mir’s) last win. I want to fight against him again, for sure, face him and impose my pace. I want this bout for 2015, this is my plan. I’ll give him this opportunity but I have to make sure that I’ll have something to gain, since I won two fights and he won none of them. As long as there is something for me to take out of this situation, I would like to fight him again. No problem.”

“What would he have to gain is a win in his career. He needs it. He won’t be fight against a ‘nobody’. It would be interesting for me and for him. I won’t give him a easy fight. If he wants to test his skills, I’ll give him a tough task.”

The first two fights between Mir and Nogueira were shocking in their own way; the two first faced off at UFC 92, Mir was the first man to finish “Big Nog” by strikes and snatched the interim heavyweight belt at the same time. Then came the rematch at UFC 140, Nogueira had Mir in huge trouble against the fence but let the fight go to the ground. From there Mir was able to crank a kimura and snap Nogueira’s right arm.

Mir vs Nogueira 3 is probably the only marketable fight for both guys at this stage in their careers; Mir is coming off four straight losses, his last victory in 2011 against Nogueira, and “Big Nog” is winless since his 2012 UFC 153 submission over Dave Herman. Title implications are nil, as the top of the division once again grows in contenders, so how about Mir vs Nogueira 3? I’d certainly tune in.