LowKickMMA.com
Home UFC News Ben Rothwell Calls Out The Heavyweight Division: I Will Have The Title... 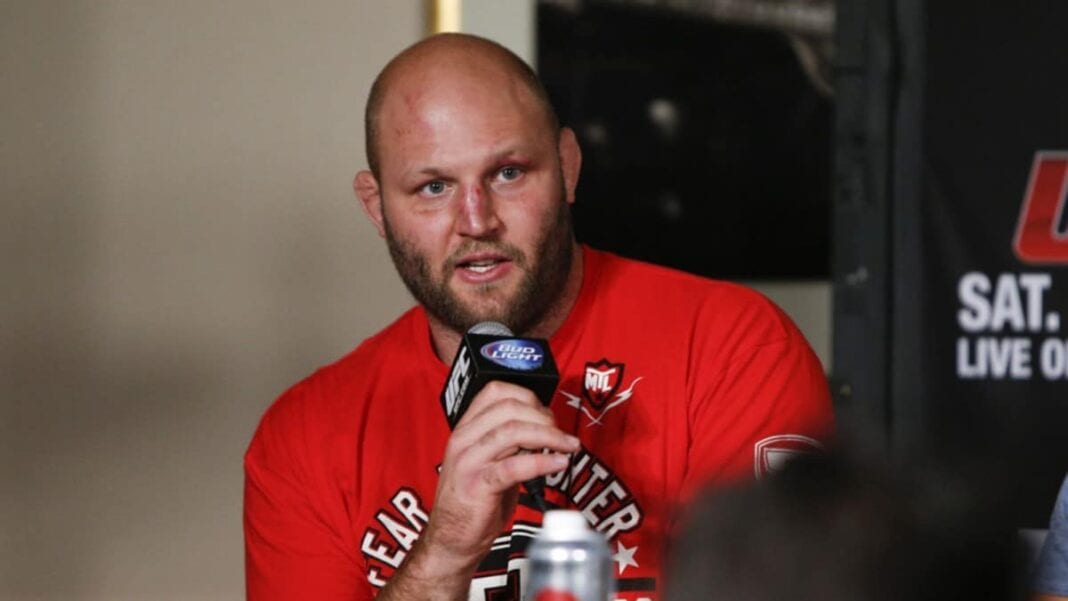 No. 9-ranked heavyweight “Big” Ben Rothwell has quietly put together an impressive three-fight winning streak including a stunning knockout victory over Alistair Overeem last September as well as a first-round submission win over Matt Mitrione at this past Saturday’s (June 6, 2015) UFC Fight Night 68.

With Rothwell’s new found success seems to have come a new voice as “Big” Ben has become quite vocal, and rather entertaining as of late. After putting on one of the craziest post-fight speeches in recent memory, he appeared on the MMA Hour today (June 8, 2015) with some bold comments.

With the UFC’s new and improved drug testing program set to go in to effect in less than a month, Rothwell put the entire heavyweight division on blast, saying that the fighters won’t look the same after the new testing begins, specifically noting Cain Velasquez. “Big” Ben also noted that Velasquez’s only challenge isn’t former champion Junior dos Santos, and that the champion is in for a challenge at this weekend’s UFC 188 when he defends his title against interim champion Fabricio Werdum:

“Javier Mendes, it’s cool that I got to hear his comments. He thinks JDS is still the only threat to Cain, huh? That’s a joke in itself. I’m not pissed off, I laugh, it’s funny. It’s whatever. That’s wishful thinking. He is hoping that is Cain’s only challenge. It’s not. Is the guy tough? Sure. But I think he’s definitely got his hands full with Werdum. Werdum is going to bring some challenges to him. Regardless, it doesn’t matter to me. Let’s see what happens after July 1st when advanced testing starts kicking in. Let’s see if he still fights the same way he has. I doubt it.”

Rothwell continued, saying that he’s not implying anything and that if any fighters take offense to his comments, they may have to look themselves in the mirror. He also claimed that he’s excited and ready for the new testing, and he believes that he’ll have the belt by next year:

“I’m not implying anything, I’m just saying I don’t believe the heavyweight division is going to look the same after July 1st. Now, if anybody takes offense to that, maybe they got to look at themselves as the problem. Me, I’m ready. So, I’m very excited. That’s why I am so confident that I will have the title by next year.”

There is some irony in these statements, however, as Velasquez has never failed a drug test or been suspended. Rothwell on the other hand, can’t say the same, as he was suspended in 2012 for elevated testosterone levels despite being granted the right to use the now banned testosterone-replacement-therapy (TRT). Speaking on that situation, “Big” Ben noted that the UFC knew about his use, and that he doesn’t regret anything:

“People say ‘Ben Rothwell, you did this and that.’ Whatever, 2012, mine was a prescription, the UFC knew about it, and it was what it was. I don’t regret anything, I had to go through that. Now that I went through that I get scrutinized 10 times as much as everyone else. I know where I’m at.”

It may not just be his recent wins that has brought out this new side to Rothwell, as he claims that ever since legendary former middleweight king Anderson Silva shockingly tested positive for performance-enhancing-drugs, his thoughts changed:

“When Anderson Silva tested positive, a seed inside of me opened up. Something changed dramatically in my life. I was so upset and so enraged at the same time. I was like, I knew it, I knew it all along. And it just came, it’s true. It’s sad to see these things about these heroes we looked up to, these heroes we believed so much in, it’s just, it’s a fact these guys are doing anything they have to win, and they’re not real.”

Do you see any truth in “Big” Ben’s comments? Will the heavyweight division change when the new testing is implemented? And although Rothwell has evolved quite a bit since he was brutally knocked out by Velasquez in 2009, can he really hang with the champ?