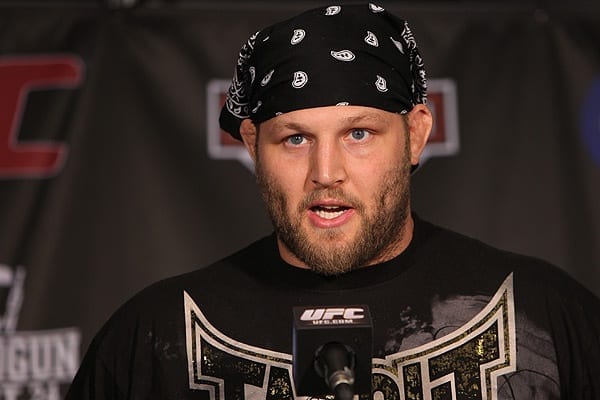 With the surprising win, Rothwell added Mitrione to his growing list of victims that most recently included former Strikeforce champion Alistair Overeem, and he put himself into prime bargaining position in the contender-starved UFC heavyweight division as well.

After the fight, Rothwell took the opportunity to issue a WWE-style callout of basically the entire division, saying that no one can defeat him in the Octagon and even finishing the promo with an evil laugh:

Rothwell believes that with three straight finishes, believes that the only fight that makes sense for him right now is a No. 1 contender bout:

“The only fight that matters to me now is the No. 1 contender spot,” Rothwell said. “I will have the UFC title. I know right now there is not a man on this planet that can stop me in this Octagon. And only politics can slow me. I don’t have much left to say other than you have seen nothing yet.”

But during the event’s post-fight presser, Rothwell narrowed down his focus to another heavyweight who, at 36 years old, has enjoyed a similar run of success as of late:

“I think Andrei Arlovski and I should dance,” Rothwell said. “He’s ranked fourth and some people are already talking about him getting the next title shot. I think him and I should fight next.”

‘Big’ Ben could have a good point, as he and Arlovski have both won three straight bouts in the Octagon. But they’ve also already fought once before, with ‘The Pitbull’ knocking out Rothwell at 2008’s Affliction: Banned show. And despite Rothwell’s run of dominance, Arlovski has also toppled higher-ranked opposition; namely with his classic first round stoppage of Travis Browne at May’s UFC 187.

Still, Rothwell believes that his recent body of work is enough for him to stake a claim at a bout with a top name, and it’s getting difficult to argue with the hulking behemoth from Wisconsin:

“My performances have slowed me down in the past,” Rothwell said. “Now, I think I’ve made a case for myself. Things are different. Three-fight win streak, three finishes and I think it’s time we make something happen and let me fight one of these top guys.”