LowKickMMA.com
Home ONE Championship News Ben Askren Won’t Kiss Up To Dana White, But Is Willing To... 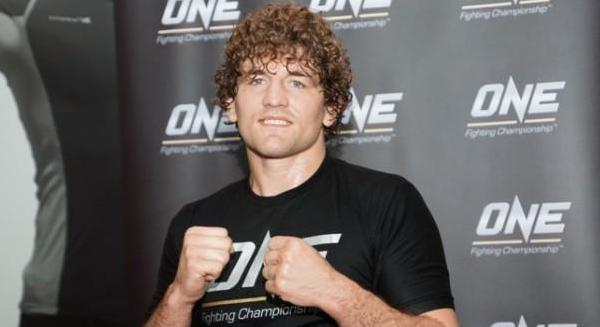 Former Bellator welterweight kingpin, and newly crowned ONE FC champion Ben Askren has had a rough ride State-side this past six months. Having never lost as a pro, “Funky” was released from Bellator after his title defense against Andrey Koreshkov in July 2013. Bellator CEO of the time, Bjorn Rebney, cited the fact that Askren was just not entertaining enough, the same reason that the UFC never offered him a contract.

Now 2-0 for ONE FC, and coming off an 84-second TKO of Nobutatsu Suzuki for the promotion’s welterweight belt, it seems that Askren is being considered by Dana White as a potential signing. That being said, “Funky” had a rather interesting reply to White’s hinting.  While talking to MMAFighting.com, Askren went deeper in to his opinions about the UFC, and more specifically Dana White:

“I have a hard time with how Dana White treats people. “It’s kind of like all of us had that time in high school when we were bullied by the cool group of kids,” Askren said. “Then we did something, then the cool group said ‘oh my god, can you be part of our group?’ Then some of us who didn’t have low self esteem said ‘well, you didn’t want me the first time, I’m alright.’ Then some other people, they run, ‘the cool kids want to hang out with me? Yes, please.’ I think it’s kind of one of those things.”

Askren is not the first to have been rubbed the wrong way by White, and will likely not be the last. At this stage in his career though, he will probably have to bite the bullet, and his lip, as most people do with their employers. That is, should he actually sign for the promotion. As an unbeaten champion of two mainstream promotions, a move to the UFC is surely the end game for “Funky”, right? Wrong, says Askren:

“Him saying I’m not good enough for the UFC? I’ve got more skills in my pinky finger than half the damn guys in the UFC,” Askren said. “Have you seen some of these guys fighting lately? It’s ridiculous. Having the letters UFC behind my name is not the be-all, end-all it is for someone. Some people think once they get into the UFC, that’s it. I think with having more large organizations in the word, it’s going to be great for the fighters, because the right now the fighters are being underpaid greatly, in my opinion, and I was one who was able to step outside that box and go find a great paycheck somewhere else.”

With the rift continuing to build between the two parties, it now looks like Askren is the indifferent of the two. White may be warming to the idea of the ONE FC welterweight champion joining the UFC ranks, but I’m not sure Askren is keen at all…

“Obviously, you know, he says I said a lot stupid s–,” Askren said. “I said true s–. If we go all the way back to the start, Ariel, when I made the comment that he was telling lies about the drug testing issue, all I said was, it can’t be done, it is done at the Olympic level. And now we’re seeing in 2014, they’re actually taking those measures to do what I said in 2012, they’re doing in 2014, and they’re getting done because they realize how rampant performance enhancing drugs are in our sport.”

“I’m not going to be a kiss-up. I think he started with the personal attacks before I did. … If he wanted to meet face to face and talk, we could settle the beef, I’d be open to that.”

Well that’s progress, I guess, and I’ll keep you posted as this situation evolves. In the mean time, do you think Askren is UFC material, or that he will ever bury his hatchet with Dana White? ONE FC put on a great show last week, but how long will it be before Askren chews through the talent there, and becomes a free agent again?