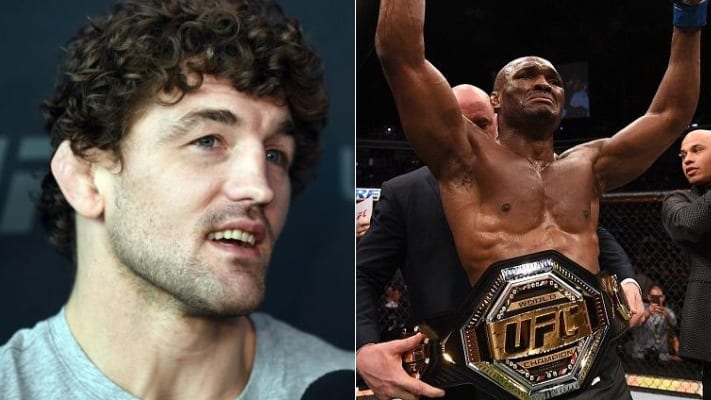 If Ben Askren emerges victorious this weekend (Sat. July 6, 2019) at UFC 239 against Jorge Masvidal, “Funky” has a contingency plan in place in case Kamaru Usman refuses to give him the next title opportunity.

Speaking to UFC.com recently, Askren confirmed he plans on calling out Usman with a win over “Gamebred” this weekend. However, if Usman refuses to sign the fight contract, he wants the winner of Rafael dos Anjos and Leon Edwards:

“I think there’s a good chance after this fight that I’m going to get a title shot. Just like last time, I’m going to call my shot. Last time I said I’m gonna go to London, and Masvidal and Till are fighting, and the winner of that will be ranked very close to where I need to fight.

“And now, two weeks after my fight here in Las Vegas, there will be Leon Edwards and Rafael Dos Anjos. So if I win this fight and ‘Marty’ [Kamaru Usman] decides to be scared and not sign the contract, then I will pick the winner of that fight.”

Of course, Askren must remain fully focused on the task at hand this weekend. The animosity between Askren and Masvidal has reached an all-time high. The pair have exchanged personal insults with one another over the past several weeks. Masvidal comes into the fight off an upset knockout win over Darren Till in London.

As for Askren, he made his promotional debut earlier this year with a controversial first-round submission win over Robbie Lawler. If Askren does manage to get past Masvidal this weekend, he very well could be looking to capture a third major World Title at 170 pounds, as he has already held the Bellator and ONE Championship welterweight thrones as well.

Do you think Askren is next in line for a title shot with a win over Masvidal?