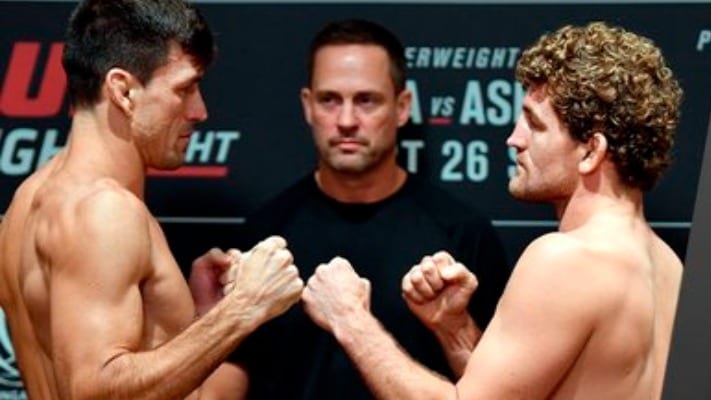 Maia comes out with some nice striking to keep Askren at a distance. Askren trying to close the distance and clinch up, throwing leg kicks and missing on a spinning backfist. Askren and Maia lock up. Maia with a nice straight. Askren with an uppercut, and Maia is able to avoid the clinch.

An uppercut from Askren lands and he hooks up Maia’s neck before landing some nice knees. Maia gets free. Askren lands a right hand and uppercut after a clinch. A nice couple of strikes land for Maia now. Uppercuts land for Askren in the clinch again. A body kick connects for Maia. Askren finally gets the takedown with under a minute left. The round ends with Askren on top.

Askren coming out with some hooks. A kick to the body for Askren connects. Askren clinches up but separates after a knee from Maia. Both men land a nice shot on the other in the pocket. Maia with some nice hooks backing away. Maia continues to land backing away. Askren shoots in and gets the takedown with a minute left. A beautiful ground exchange and sweep ends with Maia on top. Maia working into full mount now but another beautiful transition ends with Askren on top.

Maia lands a nice shot backing away and now Askren is working a takedown against the cage. Maia is able to stuff it and circles out. Askren clinches up and Maia lands a knee to the body. Askren with a beautiful takedown into side control. Maia gets back up to his feet. Askren runs into a knee to the body from Maia. Askren tries to shoot it but Maia is able to stuff it in time. A very nice left hand lands down the pipe for Maia. Askren gets another very nice takedown but Maia with a great sweep into full mount. Maia is able to take Askren’s back and sink in the rear-naked choke. Askren tries to hand fight, but Askren goes out. It’s over.