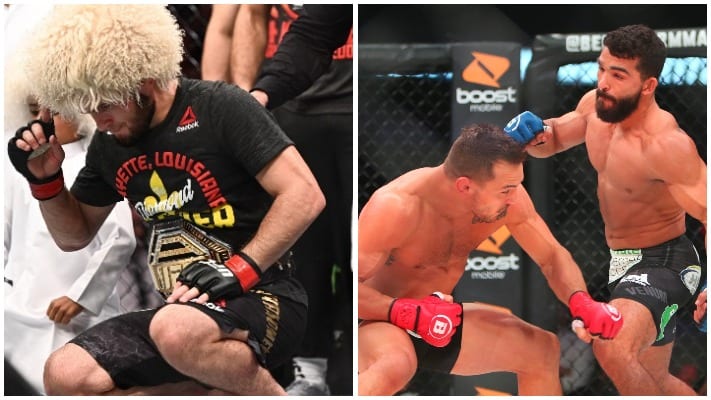 So far, 28 fighters have tried and all 28 have failed when it came to inflicting defeat on Khabib Nurmagomedov. However, Patricio “Pitbull” Freire believes he could do it.

Nurmagomedov recently defended his lightweight title with a dominant performance against Dustin Poirier at UFC 242 this past weekend. Despite some adversity, “The Eagle” was able to come away with the third-round submission win.

Many feel Tony Ferguson has the best shot at defeating Nurmagomedov, but Bellator featherweight and lightweight champion Freire feels he would be able to catch him if they met one day:

“Khabib is very tough, has phenomenal wrestling and sambo, but he has a huge deficiency on the feet so I can catch him,” Freire told MMA Fighting. “Nothing is impossible.

“I think he’s very tough, 28-0, but another fighter from Rio Grande do Norte, (Gleison) Tibau, put on a very tough fight with him, and I think there’s a path to beat him. I believe we can do it. If my hand lands — and it would land —, it’s over.”

The chances of a UFC vs. Bellator cross-promotional bout are highly unlikely. But that hasn’t stopped Freire from thinking about Nurmagomedov’s style. In fact, he doesn’t think “The Eagle” has evolved much at all:

“He has the same fight pattern since his first fight,” Freire explained. “He backs his opponent against the fence, moves and shoots to the leg. No one has ever tried… Maybe someone did try to land a knee, but I don’t remember anyone getting close to landing. Iaquinta was doing well against him, moving well on the feet, but he was closing the distance the wrong way. I think I can close the distance better.

“Maybe if he [Iaquinta] had more time to prepare or come up with a different gameplan he would have done something better. I think he was throwing a jab and a cross. If he threw two jabs and followed with two hands it would land right on Khabib’s chin. You saw him against (Dustin) Poirier now, he looks lost on the feet. He didn’t know how to move, let his hands down, ran across the cage many times. That, my friend, when you’re fighting a striker, is pretty easy.”

Do you think “Pitbull” has a chance against Nurmagomedov?