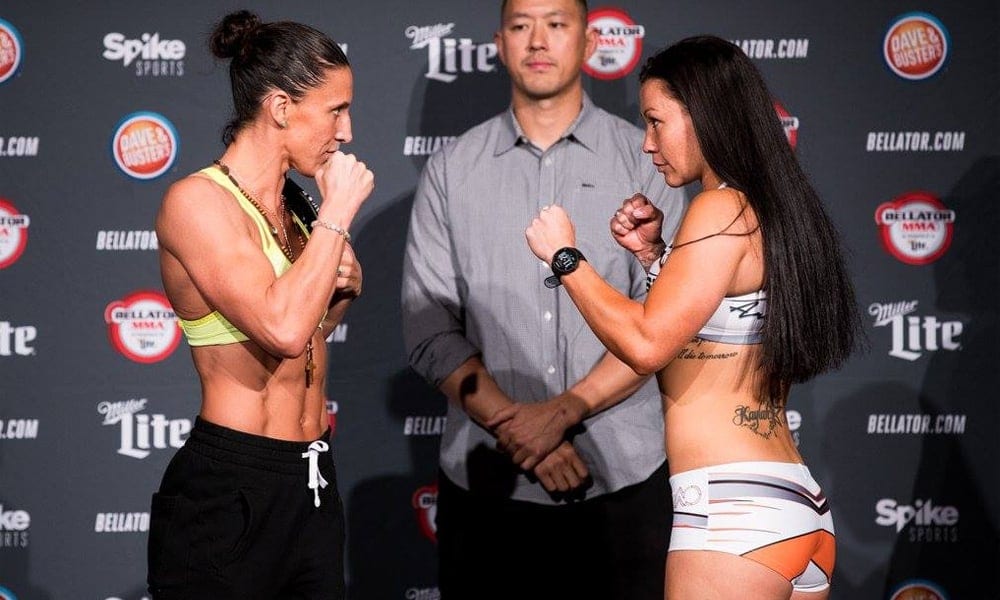 It’s once again fight day here at LowKickMMA, and the talent on display tonight (Friday, December 1st, 2017) will come in the form of Bellator 189. Headlining the card are Julia Budd and Arlene Blencowe, but there’s a whole bunch of great fights also taking place on the rest of the main card.

Julia Budd and Arlene Blencowe meet in a featherweight title bout in the main event. In round 1, they came out quick and swift. Blencowe clinches with her up against the fence while Budd was looking for the takedown. They exchanged strikes and knees while in this position. In round 2, both fighters kept their distance and was looking to get an advantage. Budd was staying very content and picking her shots. At this point, neither fighter put their stamp on this fight. Budd was able to secure a takedown with seconds left in the round. In round 3, Blencowe pressed forward and Budd was allowing it which is odd since she is not a counter striker. Budd was throwing some front head kicks. At this point, the fans were not happy with the offense being put out by these two fighters. In round 4, Budd clinched with her up against the fence and landed a series of knee strikes. They separated and went back to a slow-paced kickboxing match. Even the commentators were surprised with how little action there was. In round 5, Budd’s coach tried to fire her up as the fans booed the action. It appeared that Budd was not firing on all cylinders. Blencowe was trying to press the action but there was way too much space between them. No one including the commentators was not happy about the lack of action in this one. Budd’s only offense was kicks. The judges gave the win to Budd by split decision.

Hisaki Kato vs. Chidi Njokuani is next in a middleweight bout. In round 1, they opened up with strikes and kicks. Not a ton of action in this one as they were still in the feeling out process. In round 2, Njokuani was mixing up his strikes and getting inside. His range was also a factor. Kato had a bloody nose as a result. Njokuani clinched with him and landed a good combo followed up with a front kick. Njokuani accidentally poked him in the eye to end the round. In round 3, Njokuani rocked him mid-way through the round that nearly dropped him. Kato kept back peddling trying to find an answer. Kato grabbed a single leg and went for a takedown up against the fence. Njokuani grabbed the fence and he got a warning as a result. The judges gave the win to Njokuani.

Opening the main card on Spike TV is David Rickels vs. Adam Piccolotti in a catchweight bout.In round 1, Piccolotti was fighting smart early in the round. Rickels was pressing the action. They traded some leg kicks. This was a straight up kickboxing match. Piccolotti shot in for a double leg takedown but Rickels stuffed it. In round 2, Piccolotti clinches and pressed him up against for the first two minutes of the round. Piccolotti pressed him off and landed some good combos. Piccolotti was able to take him down and do some damage but struggled with keeping him down. In round 3, Piccolotti was able to score a takedown and got guard where he rained down slashing elbows and right hands. Rickels was able to get back to his feet and stuff some takedowns. Rickels clinched with him halfway through the round but it wasn’t enough as Piccolotti scored a takedown to put him on his back. The judges gave Rickels the decision win.

Here are the results of this event:

Juliana Velasquez def. Na Liang via submission (armbar) at 0:32 of round 2.

Cris Williams def. Thomas Lopez via submission (triangle choke) at 1:39 of round 1.