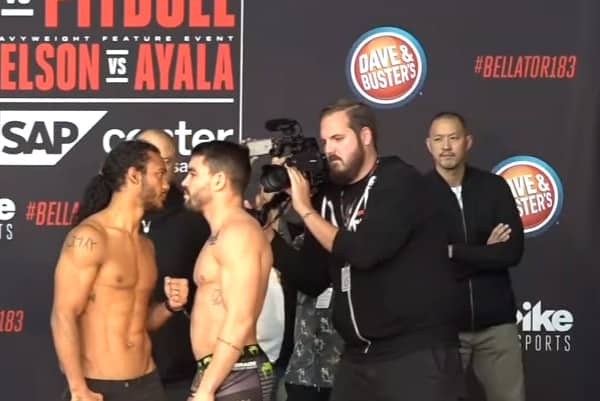 It’s once again fight day here at LowKickMMA, and the talent on display tonight (Saturday, September 24th, 2017) will come in the form of Bellator 183. Headlining the card are Patricky “Pitbull” Freire and Benson Henderson, but there’s a whole bunch of great fights also taking place on the rest of the main card.

Patricky “Pitbull” Freire and Benson Henderson meet in a lightweight bout in the main event. In round 1, there was a feeling out process early in the round as both fighters were respecting each other. Freire was accidentally poked in the eye but the fight continued. Henderson was really liking these flying moves despite none of them being successful. Round ends with neither guy having done much.In round 2, Henderson shot in on a takedown midway through the round but ended up clinching with him up against the fence. Freire was able to defend the takedown well and was landing strikes. Henderson was working way too hard for this takedown. Freire was able to land a big jumping knee strike while in the clinch then a slicing elbow. Henderson refused to give up the takedown attempts. The fans started to boo at the slow pace. In round 3, there was more activity in the center of the cage as Freire was landing big knee strikes and defending the constant takedown attempts by Henderson. Freire was able to connect with a shoulder strike. Henderson tagged him with a big left hook. Freire was able to defend a takedown attempt. They slugged it out to the finish. The judges gave the win to Freire by split decision.

Paul Daley and Lorenz Larkin meet in a welterweight bout in the co-main event. In round 1, there was a feeling out process early in the round as both fighters were respecting each other. They were mainly landing kicks. Larkin rushed Daley with a flurry of punches with two minutes to go. Daley went for a head kick but slipped. Larkin got guard and Daley went for a triangle choke, but Larkin got out of it. Larkin ended the round in side control.  In round 2, Larkin came out pressing and clinched with him on the fence. Daley spins out and tagged him with a hard spinning strike. Daley landed crushing two left hooks that put Larkin to sleep.

Roy Nelson vs. Javy Ayala is next in a heavyweight bout. In round 1, Ayala lands with a high kick, then charges in with punches. Nelson was looking for an opening to land. Ayala started to slow down, and Nelson was picking his shots. Nelson scores a big takedown against the fence and is working from half guard. Nelson got full mount with less than a minute to go. Ayala scrambled to his feet and started landing big knees and punches. In round 2, Ayala charged him again with a series of strikes and kicks. Nelson shot in on a takedown and scored it with a single leg. Nelson got guard and worked him over with strikes. Nelson got his back but Ayala was able to scramble and got his back was Nelson stood up. Ayala dragged him down and landed some strikes. Nelson back to his feet with two minutes to go. Ayala rocked him with a head kick, but Nelson fired back with some uppercuts. Nelson scooped him down to the ground. Nelson takes Ayala back down and is working his midsection over as well as landing nasty elbows. In round 3, Ayala opened up with a great right hook. Ayala lit him up with strikes, and Nelson just walked it off. Ayala was rushing in with punches.  Nelson landing some bombs now gets Ayala down again and right into side control. Ayala was trying to walk the cage as Nelson landed a series of elbow drops. The judges gave the win to Nelson by unanimous decision.

Aaron Pico vs. Justin Linn is next in a featherweight bout. In round 1, Linn clipped with a left hand right out of the gate. Within twenty seconds of the round starting, Pico scored a takedown and got his back and rained down strikes. Linn was able to get to his feet, and Pico went after him. Pico landed a series of strikes just rapid fire. Went off. Linn survived it, and the crowd went nuts. Pico clipped him with a right hand and scored another takedown midway through the round. Linn was able to get back to his feet moments later, and Pico scored a left hook for a walk-off KO.

Opening the main card on Spike TV is Adam Piccolotti vs. Goiti Yamauchi in a lightweight bout. In round 1, Picco went for a takedown, but Yamauchi caught him with a guillotine choke. Yamauchi then went for an armbar, but Picco got out of it and back to his feet. Yamauchi hung onto his left leg then clinched up against the fence. Yamauchi got on his back and locked in the rear-naked choke for the win.