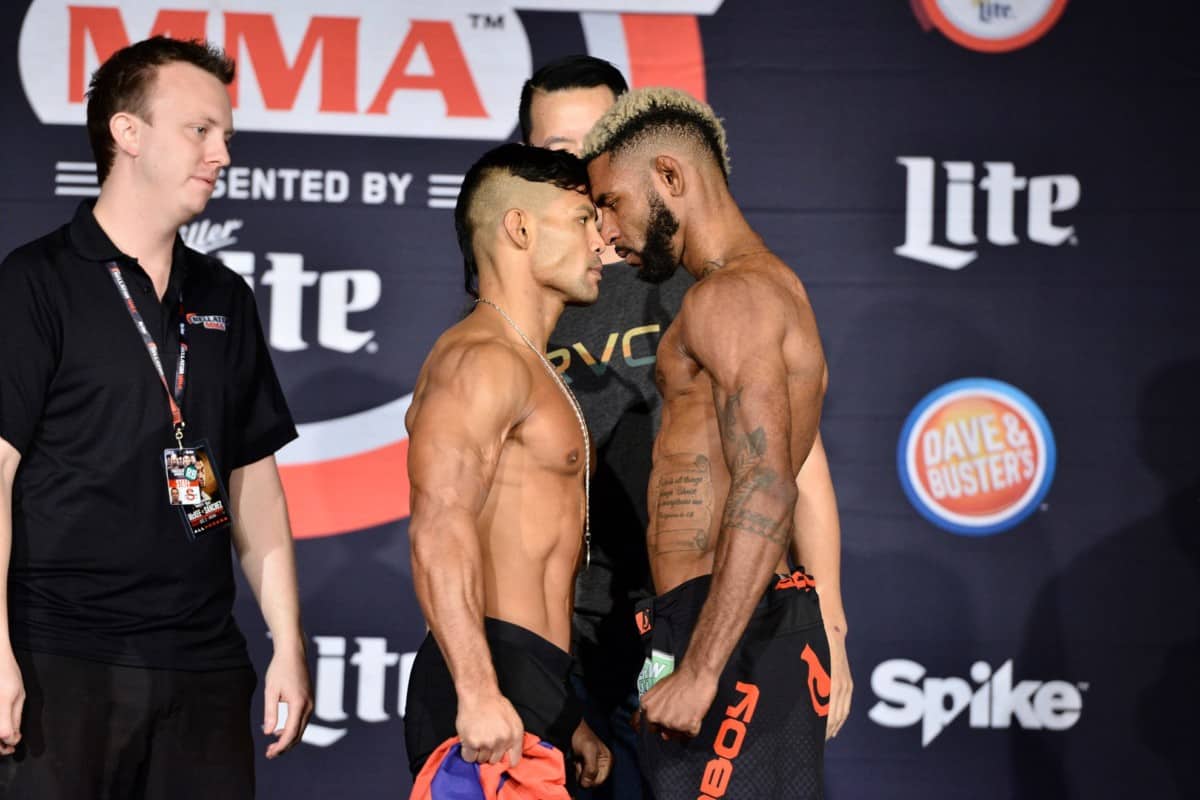 It’s once again fight day here at LowKickMMA, and the talent on display tonight (Saturday, December 3rd, 2016) will come in the form of Bellator 167. Headlining the card are Darrion Caldwell and Joe Taimanglo, but there’s a whole bunch of great fights also taking place on the rest of the main card.

In round 2, Caldwell took him down right out of the gate, but Taimanglo locked in a guillotine choke. However, Caldwell got out of it with ease. Caldwell worked him over with strikes for the majority of the round until they were stood up with less than a minute to go. Caldwell ran from him, Taimanglo pressed and stuffed a takedown. Taimanglo got his back, but Caldwell rolled and got on top in guard.

In round 3, Caldwell took him down once again and got guard. He worked him over with strikes from this position. Taimanglo had nothing for Caldwell in this fight and was a one-sided, dominating performance. The judges agreed and gave Caldwell the decision win.

John Teixeira and Justin Lawrence met in a featherweight bout in the co-main event. In round 1, both fighters came out aggressive. Teixeira threw a head kick, but Lawrence caught a head kick. Lawrence dropped him with a leg kick, but Teixeira got right back to his feet. Teixeira clinched with him up against the fence, and Lawrence landed some strikes. They separated and exchanged to the bell.

In round 2, Teixeira stunned him with a wild combo and continued to come forward. Lawrence tripped him, but Teixeira got back up and ate some combos. Teixeira clinched with him to end the round. In round 3, Lawrence was mixing up his leg kicks nicely. Teixeira had issues with his range in this round, and both fighters were tired at this point. Teixeira shot in for a takedown but was stuffed. Teixeira stunned him with a straight right hand then a knee strike, but Lawrence stayed in there and tried to survive, which he did. The judges gave Teixeira the decision win.

In round 2, MacFarlane took her down to begin the round and got half guard. MacFarlane got her back and worked her over with strikes. MacFarlane rolled and locked in an armbar, but she got out of it. In round 3, they had a wild exchange to open the round. MacFarlane was landing better shots and went for a takedown, but Ducote showed good takedown defense until she got and landed in guard. Ducote got to her feet, they exchanged then took MacFarlane down. MacFarlane picked up the decision win.

Opening the main card on Spike TV was Chidi Njokuani vs. Andre Fialho in a welterweight bout. Njokuani dropped him with a left jab and finished him on the ground with strikes in 20 seconds. Just like that!