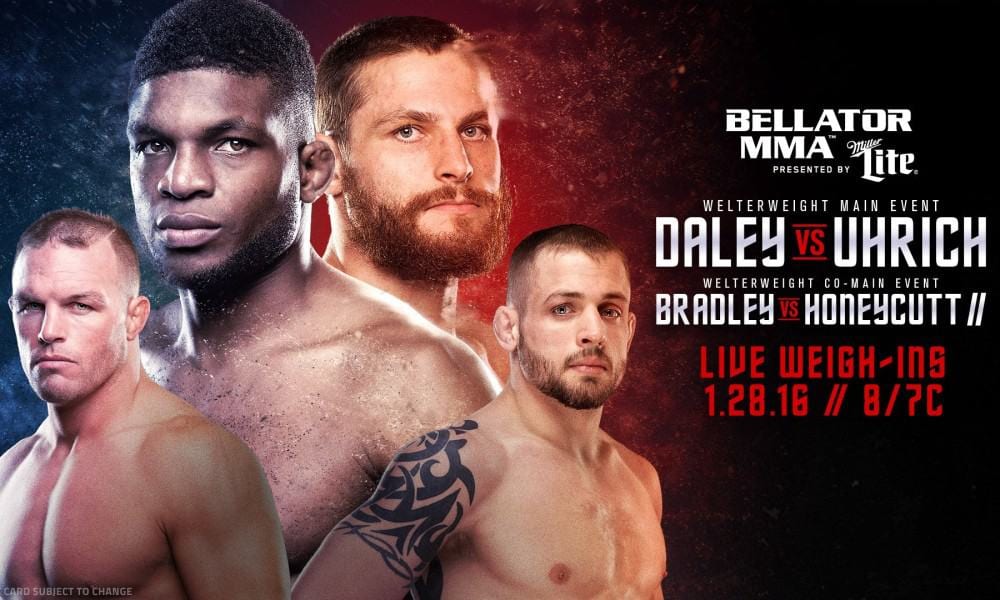 It was once again fight day here at LowKickMMA, and the talent on display tonight (Friday, January 29th, 2016) will come from Bellator 148. Headlining the card are Paul Daley and Andy Uhrich, but there’s a whole bunch of great fights also taking place on the rest of the main card.

Paul Daley (38-13-2) and Andy Uhrich (11-6) met in a welterweight bout in the main event of this event. After waiting several minutes for this fight to start, it ended very quickly. Daley stuffed all of Uhrich’s takedowns in the first-round then set him up and knocked him out with a right uppercut. Josh Koscheck, who has bad blood with Daley, was in attendance for this event. In Daley’s post-fight interview, he said that he came to entertain in Koscheck’s hometown. Daley then called Koscheck a muppet. His interview was very short and he did not call out Koscheck for his next fight.

Chris Honeycutt (6-1, 1 NC) and Paul Bradley (23-6, 2 NC) met in a welterweight bout in the co-main event of this event. If you wanted a quick finish and in impressive fashion, then this is what you got. Bradley stunned him early then caught him with a straight right hand that put Honeycutt on his stomach. Bradley saw the opening, got his back, and finished the fight in the first-round.

Ryan Couture (10-4) and Patricky “Pitbull” Freire (15-7) met in a lightweight bout at this event. This one did not last long as Freire stunned him with a right hand then moments later landed a sick left hook, and Couture went to sleep in the first-round.

Raphael Butler (9-2) vs. Tony Johnson (10-2) in a heavyweight bout opened the main card on Spike TV for this event. This was a one-sided fight to say the least. Johnson controlled the majority of the fight with his constant takedowns and cage control. As the fight went on, Butler tired out, and Johnson did what he wanted to do with Johnson. Johnson took him down with under a minute remaining and finished the fight with 30-seconds left in the fight via TKO.