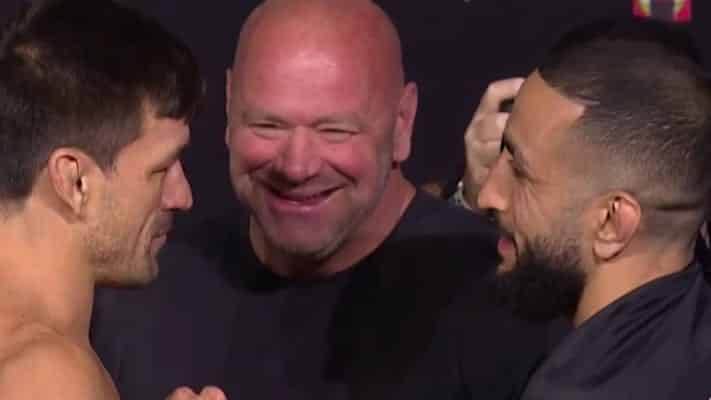 Next up on the UFC 263 main card is a welterweight contest between Demian Maia and Belal Muhammad.

Both fighters trade shots before Maia sees a takedown attempt defended. Maia eventually grabs a hold of Muhammad’s leg but the latter is doing well to defend agains the cage. Maia eventually gets him down but Muhammad gets up and eventually separates. Muhammad lands a straight right before Maia fails on a takedown attempt. Maia grabs a leg again but Muhammad is showing great balance as he backs up to the cage. Muhammad gets his leg out and lands a left hand soon after. Muhammad partially lands a right but has to defend yet another takedown. Muhammad shows great takedown defense again as he separates to end the round.

Not a lot of action early on in this second round. Muhammad is landing some kicks though. Maia is connecting with some punches before going for a takedown. However, Muhammad sprawls and does well to stuff it. Muhammad connects with a right. Muhammad follows it up with a left hand but receives one from Maia. Muhammad is starting to land much more now. Maia’s takedowns are more labored now. Maia opts for a single but much like the first round, Muhammad shows great takedown defense and balance. The round ends.

Maia shoots again but fails again. Muhammad seems to have hurt Maia with some right hands. Maia blocks a head kick from Muhammad. He attempts another single leg but Muhammad easily gets out and returns to peppering him on the feet. Maia fails again as Muhammad lands some body shots. Maia starts to land with some punches of his own but Muhammad is in clear control of this fight. Maia fails with another takedown attempt. Maia attempts another single leg and is able to get Muhammad to the fence. However, Muhammad is able to remain on his feet against the cage as the fight ends.